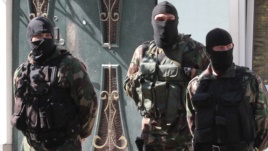 NB  The text below was posted before the most dramatic events of Sept 17 unfolded, - see the following for more detail  Crimean Tatar Mejlis given 24 hours to leave

On Wednesday morning FSB officers and bailiffs arrived at the Mejlis building in Simferopol which the FSB spent 11 hours searching on Sept 16.   A court order was read out to the head of the charitable “Crimea” Fund and member of the Mejlis, Riza Shevkiyev, after which the bailiffs began sealing property.

As on Tuesday, nobody is being allowed in or out of the building.  According to the head of the Mejlis Secretariat, Dilyaver Akiyev, Riza Shevkiyev was taken ill and an ambulance needed to be called.  There is once again little information, however Akiyev believes it likely that the bailiffs will seal all the charity’s property.

The fact that the Sept 17 action is ostensibly not directed against the Mejlis itself, but  against the charity owning the building in which the Mejlis is located, is unlikely to fool anybody.

On Sept 16 armed men carried out a search of the home of Eskender Bariyev, member of the Mejlis and removed computer technology.  Bariyev says that men with machine guns burst into his home at around 6.30 on Tuesday, and then began searching the flat.  Their behaviour was rough despite the fact that Bariyev’s wife and small children were present.

They claimed to be looking for weapons, ammunition and prohibited literature as part of a criminal investigation into the events on May 3, however did not provide any court order

Another search was carried out in the home of the head of the Belgorod Regional Mejlis., Mustafa Asaba.

On Sept 17 armed men also carried out searches of at least four Crimean Tatar homes in the village of Kolychugino outside Simferopol.   The events on May 3 were once again cited as a pretext, as well as a domestic incident which took place several months ago.

Six police cars and one GAZel carrying men with machine guns appeared in the village.  The searches themselves, purportedly looking for weapons, drugs and ‘prohibited literature’ lasted from 2-3 hours.

Please see Armed offensive against Crimean Tatar Mejlis for more details about a very ominous escalation in repressive measures against both the Mejlis and Crimean Tatars in general.