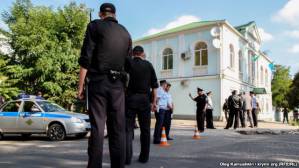 If any Crimean Tatar had hoped that fears about Russia’s occupation of their homeland were unfounded, hope died on Sept 17.  The Mejlis, or representative body of the Crimean Tatar People has been given 24 hours to ‘vacate’ their headquarters in  Simferopol.   Associations with the Deportation when all Crimean Tatars were given just half an hour to prepare for exile are perhaps exaggerated, however the reminders of Soviet repression are increasing by the day.

The occupation regime has formally targeted the Crimea Fund charitable organization which owns the relevant building on Schmidt St, however their real aim is clearly the Mejlis.

According to a court writ read out on Sept 17 to the head of the Crimea Fund and  member of the Mejlis, Riza Shevkiyev, the building must be ‘evacuated’ within 24 hours.  If it is not, all property will be seized and nobody will be allowed to enter.

The official grounds cited for the move are a writ issued by the Central District Court of Simferopol on Sept 15 (case № 2-1688/14).

This document prohibits the charity from carrying out any of its powers as owner of the Mejlis headquarters and six other addresses, including its right to lease or sell the properties.  If the Fund fails to comply with this court order, it could face criminal prosecution.

This surreal writ has been issued “to defend the interests of an unspecified circle of individuals” in a law suit against the Crimea Fund.  These mysterious individuals’ “interests’ are to be further protected by the Crimea Fund’s bank accounts in Vladimkombank being frozen.  The Fund is prohibited from opening new accounts.

Shevkiyev refused to sign that he had read any of the documents presented saying that he has never been informed of any debt incurred by him or the Fund.  Mustafa Dzhemiliev, veteran Crimean Tatar leader prohibited from returning to his homeland in April this year, called it an attack by bandits. He poured scorn over the so-called court writ saying that the judge who purportedly issued it has been on leave for some time.

The move came after the major operation on Tuesday during which armed men blocked access to the Mejlis building, while the FSB spent 11 hours searching the building.  It seems likely that they were hoping to find something ‘incriminating’, and having failed to do so, chose another line of attack.

The building on Schmidt St houses the Mejlis, the editorial offices of its official newspaper Avdet and the offices of the charity.  Shevkiyev explained to the Radio Svoboda Crimean Service that there is clearly no possibility of evacuating the premises in the space of 24 hours.  Yet by not leaving, they give the occupation regime the official grounds for seizing and occupying the building.

Shevkiyev links the development with the low turnout at the ‘elections’ organized on Sept 14 to the Crimean parliament and local bodies.  The Mejlis had called on Crimean Tatars and all Crimeans concerned about the grave rights violations since Russia’s annexation, and Crimean Tatar rights in particular, to boycott the elections.  The call was clearly headed in full.  No western government, incidentally, has recognized the ‘elections’.

Shekiyev believes that the Crimean Tatars are to be used as a scapegoat, presented as the source of the ills facing the Crimea and as an enemy element, with repressive measures against them stepped up.

This may be an additional reason, however the offensive against Crimean Tatars – and others who oppose Russian occupation -  began considerably earlier and has been escalating over recent months.

For a second day searches have been carried out in a large number of Crimean Tatar homes, as well as prosecutor’s office checks of various institutions.  Such searches began back in May, however the scale over the last two days is unprecedented.

On Sept 16 armed men carried out a search of the home of Eskender Bariyev, member of the Mejlis and removed computer technology.  Bariyev says that men with machine guns burst into his home at around 6.30 on Tuesday, and then began searching the flat.  The intruders saw no need to modify their behaviour or hide their machine guns despite the fact that Bariyev’s wife and small children were present.

They claimed to be looking for weapons, ammunition and prohibited literature as part of a criminal investigation into the events on May 3, however did not provide any court order

Another search was carried out in the home of the head of the Belgorod Regional Mejlis., Mustafa Asaba.

On Sept 17 armed men also carried out searches of at least four Crimean Tatar homes in the village of Kolychugino outside Simferopol.   The events on May 3 were once again cited as a pretext, as well as a domestic incident which took place several months ago.  Six police cars and one GAZel carrying men with machine guns appeared in the village.  The searches themselves, purportedly looking for weapons, drugs and ‘prohibited literature’ lasted from 2-3 hours.

There was also a search on Wednesday of a mosque in the Simferopol suburb of Fontany.  Shevket Bekirov, head of the Fontany mejlis says that people from the Prosecutor’s office were checking whether believers in the mosque take part in salat, or ritual prayer and whether they are involved in ‘extremism’.

The check was carried out during prayers.  Three books on the large list of books that the Russian authorities for reasons of varying levels of plausibility deem to be ‘extremist’  were removed and five others taken away for ‘checking’.

A telling example of where the occupation regime is looking for ‘extremism’ was demonstrated in one other search on Wednesday, this being of a school with Crimean Tatar tuition in Zuya, Belgorodsky district.

The searches are clearly aimed at intimidating Crimean Tatars, and destroying the Mejlis which has from the outset opposed Russian occupation and stressed that the Crimean Tatars are in their own homeland – Ukrainian Crimea.

The Mejlis is currently holding legal consultations to determine its next move.  Given such an ominous escalation in open repression against the indigenous people of the Crimea, the need for support from western countries in more than mere words of ‘deep concern’ is self-evident.