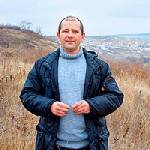 Nothing has been heard from journalist Oleksandr Bilokobylsky since he set off on Sept 13 from Kharkiv to take food and medicines to relatives in Luhansk.  Chief Editor of Realna Gazeta Andriy Dykhtyarenko reports that the last contact with the journalist himself was on Saturday afternoon from the coach taking Bilokobylsky from Starobelsk to Luhansk.

His wife, however, reports that on Tuesday, Sept 16, she received a text message from an unknown number but signed with her husband’s name.  The message was that he was alive and well, but could not come back.

She told Telekritika that she had tried to report his disappearance to the police in Kharkiv where the couple have been living.  Incredibly, she was told that she could only do so at the nearest police station to where the person disappeared.  After receiving help from local volunteers, she was given the chance to lodge such a report, but was still treated very badly and in the end the report was not registered.

Her husband set off for Luhansk where they are originally from to take medicine for his sister who has asthma and a friend whose child has epilepsy.

32-year-old Oleksandr Bilokobylsky has written for a number of local newspapers as well as for Obozrevatel and the Russian RIA Novosti.  He has recently been living in Kharkiv with his wife and 10-month old son.

As reported, at least 5 other journalists are believed to be held hostage by the Kremlin-backed militants in Donbas, namely:

Kharkiv journalist Roman Cheremsky from Ukrainsky Prostir and Valery Makeyev.  There has been no contact with them since the night from Aug 30-31.  They are believed to be held in the prison of the so-called ‘military command of the LPR’ in Rovenki [Luhansk oblast].

Lviv journalist Yury Lelyavsky As reported, the Lviv freelance journalist reporting for ZIK was taken hostage by Kremlin-backed militants for a second time on Aug 25 in the Luhansk oblast. .

Dmitry Potekhin, blogger for Ukrainska Pravda and director of the European Strategy Group.  He is being held hostage by the DPR and has begun a hunger strike in protest.