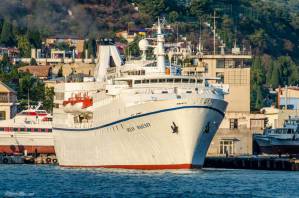 During a week in which Russian FSB carried out armed searches of Crimean Tatar families, mosques and schools and the Mejlis, or Crimean Tatar assembly came under unprecedented attack, it was business or fun as usual for German entrepreneurs and passengers on a Hansa Touristik GmbH operated luxury liner visiting Yalta.

In breach of an international embargo

On Sept 17 ‘Ocean Majesty’, a Greek luxury cruise liner operated by the German tourist agency Hansa Touristik GmbH flouted the international embargo and sailed from Sochi in Russia into the Crimea, arriving in Yalta at around 8.30 Kyiv time.  While the FSB carried out an 11-hour search of the Mejlis and men with machine guns raided a Mejlis member’s home, a major Crimean Tatar charity and the Mejlis’s newspaper Avdet, 500 German tourists basked in the Yalta sunshine.

Black Sea News reported the infringement of Ukrainian and international legislation on Sept 17, and asked the prosecutor’s office to initiate criminal proceedings.  It also predicted that such breaches of an international embargo would immediately be used by Russia in trying to demonstrate that the world has effectively accepted its illegal annexation of the Crimea.

They were, unfortunately, quite right, and the official Russian RIA Novosti not only ran a report on its front page, but now has a cartoon saying “Sanctions are sanctions, but the cruise is according to timetable”.  It is possible that this overt breach was in fact planned as a test run to see whether there was a reaction.

Ukraine issued a directive on July 15 whereby it closed the ports in Yevpatoria; Kerch; Feodosia; Yalta and Sevastopol to international shipping. That information was passed to the International Maritime Organization and its members, as well as to representatives of foreign companies with IMO accreditation

Ukraine is entitled to demand that ships which have illegally docked in Crimean ports are arrested in any port in the world.  According to Oleg Alyoshin, partner in the law firm Vasyl Kisil and Partners, this is in full accordance with the International Ship and Port Security Code. Alyoshin explained to Interfax Ukraine that Ukraine has a wide range of legal means for defending its interests including arrest of ships which enter Crimean ports while the Crimea is under Russian occupation. It can also seek a ban on their entry into the Crimea by citing the same code.

The UN Resolution of Territorial Integrity of Ukraine in late March 2014 called on international organizations, including the IMO, states and others to not recognize any change in the status of the Crimea and Sevastopol and refrain from any actions that could be viewed as recognition.

Moscow Times reports that “the EU has subjected the Sevastopol and Kerch commercial ports to asset freezes, though the port of Yalta does not appear on its blacklist”.   So what?  Rather than being a loophole for visits to occupied Crimea, this surely only indicates a baffling omission by the EU.

QHA [Crimean News Agency] has reported that a representative of the German company Integra Europe Hans-Joachim Bäumler met in Russia’s Sochi with the Crimean occupation regime’s acting minister of tourism Yelena Yurchenko and spoke of his company’s readiness to consider collaboration with the Crimea.  He reportedly stated that most German citizens do not support the official government line on the Crimea.

Bäumler was taking part in an ‘International Investment Forum’ from Sept 18-21 which 37 foreign countries attended.  A Crimean delegation was present for the first time, presumably hoping to attract investors whose wish for profits overrides their concern about compliance with the law.

Russia’s invasion and annexation of the Crimea was in flagrant violation of fundamental principles of international law.  It has also resulted in a major escalation in human rights abuse with the indigenous Crimean Tatar population the main, but by no means the only, target of repression.

If EU governments cannot come up with proper sanctions, then ordinary members of the public should. A boycott of Hansa Touristik GmbH and any other companies flouting the embargo are a good way to start.