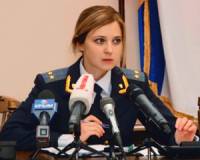 Moscow really scraped the barrel when they installed Sergei Aksyonov as the Crimea’s ‘prime minister’ and Natalya Poklonskaya as ‘prosecutor’. Both have effectively threatened to prosecute those who do not recognize Russian rule and to deport Crimean Tatars for what they call ‘inciting interethnic enmity’.

Poklonskaya saw the need to express the following gems on Sept 22.  “All actions aimed at not recognizing Crimea as part of Russia will be punished by law.  People inciting interethnic enmity in the Crimea will be deported”.

The Kremlin’s puppet prosecutor has thus warned of prosecution for exercising the human right to express one’s point of view.  “Deportation” for inciting inter-ethnic enmity would be excessive under any circumstances and in any country, however the situation is exacerbated by Poklonskaya’s highly specific understanding of what is involved.   Over recent months, claims have been made that the reinstatement of the Ukrainian flag over the Mejlis building was such ‘incitement’, as were, in her rendition, articles in the Mejlis newspaper ‘Avdet’ which were also deemed ‘extremist’ for their mention of annexation and occupation.

Poklonskaya’s comments were edited  on Tuesday morning to remove the word ’deportation’ (a screenshot of the original is available).  Since this has direct bearing on the mounting repression against the Crimean Tatars, it is worth noting that Poklonskaya’s original utterances largely aped the views undeniably expressed by Aksyonov.   On Monday Kommersant.ru published an interview with the latter in which he announced that the Mejlis, or Crimean Tatar representative assembly, was never registered and “doesn’t exist”.  He claimed – falsely – that the Mejlis enjoys “relatively little authority, that if a survey were carried out, it would find that the Mejlis is supported by 15-20% of the population”.

Once again we hear the refrain: “All actions aimed at not recognizing the reunification of the Crimea with Russia, non-recognition of the country’s leadership, will be punished by law and there will be a very hard stand.”  Aksyonov will ensure, he threatens, that all those who cause inter-ethnic conflict will in one way or another be thrown out of the Crimea, or will face criminal prosecution.

Asked about the banning of the remembrance meetings marking the seventieth anniversary of the Deportation of the entire Crimean Tatar people in May 1944, and the searches of Muslim schools and private homes, Aksyonov claimed that this was mainly ‘concern about citizens, for Russians and for Crimean Tatars”. If there is a half-percent likelihood that with some meeting or other something bad could happen to somebody, I won’t hold anything”.

When the interviewer notes that the Crimean Tatars gathered peacefully for 20 years, Aksyonov replies: “All these 20 years the events were used as blackmail of the authorities in order to demonstrate their strength and say that the Tatars are ready for anything. And after each rally the authorities cravenly made concessions. … Crimean Tatars, especially young ones, walked in a crowd, behaved in a challenging manner, drove with Crimean Tatar flags and really tried to morally humiliate Russians, there are no doubts on this”.

There are plenty of doubts and were from the outset.  Aksyonov’s rise to power need not be considered meteoric.  It is all much more banal when Russian soldiers are providing machine gun ‘lobbying’ for a marginal politician whose Russian nationalist party had minimal support in parliament.  Why the Kremlin opted for a person known as Goblin because of his links to a criminal gang can only be hypothesised.  Aksyonov has clearly understood whom he has to thank for his new position at the top, and that he can lose it just as easily and he constantly makes obsequious references to Russian President Vladimir Putin.

Putin has not concealed his full support for the 5-year exile from their homeland imposed on Crimean Tatar leader Mustafa Dzhemiliev and head of the Mejlis, Refat Chubarov.  Neither he, nor his protégés, leave any doubt that only those Crimean Tatars who buckle under can feel safe in the Crimea.  The real authority enjoyed by the Mejlis was demonstrated at the elections on Sept 14 which almost all Crimean Tatars heeded the Mejjlis and boycotted. It is this authority that the Russian occupiers are determined to crush.

As in Soviet times, Putin’s regime and his puppets in the Crimea are attacking those whom they cannot tame and silence. Once the persecution was for so-called ‘nationalism’ or ‘anti-Soviet agitation and propaganda’, now the regime’s opponents are claimed to be ‘extremist’ or ‘inciting inter-ethnic enmity’.

In recent days there has only been one statement of the standard ‘deep concern’ from the EU.  Any moves to ease sanctions against Russia are made contingent solely on its behaviour in eastern Ukraine and Crimea goes largely unmentioned.  When opponents of annexation and the indigenous people of the Crimea are threatened with deportation by the head of government and ‘chief prosecutor’, such effective silence from the West is totally unacceptable.