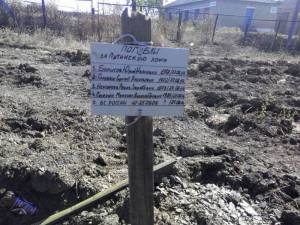 Russia’s foreign ministry has demonstrated yet again how closely it cooperates with the militants it backs in Donbas and its own, Kremlin-loyal media.  All three went into action on Sept 23 in operation ‘mass grave’, with the foreign ministry alleging that the Ukrainian military were guilty of war crimes.  Since Moscow has so loudly demanded a “principled assessment” from the OSCE, UN and Council of Europe, it is worth hearing the OSCE account. .

In its Sept 23 report, the OSCE’s monitoring mission explains that they were approached by ‘“the ‘military police’ of ‘Donetsk People’s Republic’ (‘DPR’)” who informed them of three unmarked graves allegedly containing multiple bodies.   Two graves were in the Komunar coal mine, the third in the village of Nyzhnia Krynka.  OSCE found four bodies in the mine, as well as “eight 9mm Makarov pistol cartridges approximately five meters away from the bodies”.  Outside the village they “observed a pile of earth resembling a grave which had a stick with a plaque, written in Russian and containing the names (or in one case – initials) of five individuals. The plaque indicated that the individuals died on 27.08.2014. On top of the plaque there was another inscription saying: ‘Died for Putin’s lies’.”   The OSCE stresses that nowhere did they see any forensic experts nor are they able to provide a forensic assessment of the sites.

That was not nearly sensational enough for the Russian media.  ITAR-TASS quoted the OSCE but only after falsely claiming that the special monitoring mission had stated in its daily report that “representatives of the Donetsk People’s Republic have found three mass graves”.

The militants were, as usual, eager to oblige the Russian media, and DPR ‘prime minister’ Alexander Zakharchenko is quoted as asserting that in one grave the militants had found the bodies of around 40 civilians, in the other two – the bodies of captured militants and Ukrainian soldiers.

All Russian reports say that Ukraine’s National Guard was ‘previously’ based in this area.  According to the Ukrainian Security Council’s map of its ‘anti-terrorist operation’, the Ukrainian military were only there during the first days of August, and then for several days in the middle of September.  Since the OSCE report found that the bodies were already beginning to decompose, the latter period is excluded, while the sign over the possible grave says that one of the people died on Aug 27.

Zakharchenko’s account, even in terms of numbers, differs radically from that of the OSCE’s mission.  None of the further ‘details’ lavishly provided in the media and by the foreign ministry are mentioned by the OSCE.  Quite the contrary with the OSCE making a particular point of stressing the lack of any forensic examination, either by themselves or by the militants.

Yet Russia’s foreign ministry claims that these were “obviously” executions with this supposedly demonstrated by “hands tied behind their backs, the evidence of “control” shots to the head”.  It asserts that these were “war crimes for which there can be no justification” and demands a full investigation.

In the meantime, an exhibition has been laid on in Warsaw at the Victoria Sofitel Hotel where OSCE conferences are taking place.  Radio Svoboda notes that the exhibition presents photos of people killed, including civilians and claims that these were victims of the Ukrainian military, while not providing any proof.

Radio Svoboda also spoke with Yevhen Zakharov, head of the Kharkiv Human Rights Group which Is endeavouring to gather information about all rights violations in Donbas., including those committed by members of Ukrainian volunteer battalions.  He is convinced that the allegations of executions committed by the Ukrainian military are false, and says that they have not received a single report of such killings from local residents or people involved in the conflict. If they had happened, information would have come out, he says, and notes that there have been reports of executions by “the other side”.

‘Reports’ of executions are in fact quite frequently circulated by both sides of the conflict.   With the difference, however, that many of the victims of DPR torture and killing can be named. They include Horlivka Council deputy Volodymyr Rybak; 19-year-old student Yury Popravko; 25-year-old Yury Diakovsky; four members of an evangelical church in Slovyansk and Mykola Zelenec, honorary Lithuanian consul for the Luhansk oblast.  The militants themselves have admitted to executing people.  This admission came shortly after common graves were found in Slovyansk soon after the militants fled.

There is another aspect to this story since there appears to be evidence that the sign “Diied for Putin’s lies” appeared on the Internet at the beginning of September.  The picture here was apparently posted originally on the Facebook page Cargo 200 From Ukraine to Russia where people tried to find out whether their sons or husbands were fighting – or had died –  in Ukraine.  The last line can be seen very clearly to give the letters for Armed Forces of Russia.  One of the comments below asserts that three of those killed were from Tatarstan.  This was shortly after news of the first large number of  Russian soldiers being killed in Ukraine when many people asked, together with the Russian newspaper Vedomosti, “If Russia is not at war, then who is in those freshly-dug graves?”  The words on the plaque could just as easily indicate awareness that the men who died had been duped by Russian propaganda and lies about the war in Ukraine.  Its mention now, and claims that it is evidence of Ukrainian crimes against Ukrainian civilians could be intended to deflect unwanted attention from the deaths of Russian serviceman.

Whether or not the latter is true, it is unlikely that this will be the last such report of supposed Ukrainian crimes ‘uncovered’ by the Kremlin-backed militants in areas under their control.  With such influential backing, why would they stop?