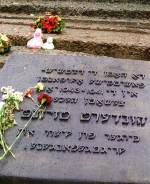 73 years ago, on 29 and 30 September 1941, the Nazis murdered over 33 thousand Jewish men, women and children at Babyn Yar [or Babi Yar, from the Russian], then a ravine on the outskirts of Kyiv.

Notices appeared around Kyiv the day before, ordering all Jews to come the next morning with their possessions and documents to the corner of Melnykova and Degtyryovska St.  Those who did not, the announcement read, would be executed.

Around 150 were given refuge by non-Jewish friends or neighbours.  Each of those people faced certain execution if the Nazis found out.

Many of those who came believed that they were to be deported. Instead, they were forced by Nazi Einsatzgruppen and local collaborators to take off all their clothes, and then murdered at the edge of the ravine.   Only 29 people are known to have survived.

In Soviet times the execution during those terrible days of Jews at Babyn Yar was assiduously ignored.  Plans to build a rubbish dump at the ravine were condemned by the writer and War veteran Viktor Nekrasov who in 1959 spoke out, calling for a monument to those murdered at Babyn Yar.  The authorities ignored such calls, with even pulp being pumped into the ravine.  This led in 1961 to a catastrophic mudslide which claimed the lives of about 2 thousand people.

During the 1960s and 1970s the Soviets continued building over the ravine area.  A television centre and sports complex were built on Melnykova St, and by 1980 the territory had mainly been turned into a park, with only a small part of Babyn Yar remaining.

After unauthorized meetings on 29 September 1966, the 25th anniversary of the Massacre (addressed by Ivan Dzyuba, Viktor Nekrasov and others) and a year later, the authorities finally acknowledged the need for some monument.  The official monument erected by 1968 was to the memory of “Soviet citizens during the period of the temporary German-Fascist occupation of 1941-1943”.

The story of Soviet lies is long and sordid.  In 1991, just a month after Ukraine’s independence, a formal apology was made and a Menorah erected at Babyn Yar.

It is true that during the War years many of those murdered at Babyn Yar were not Jewish.  It is also true that on these terrible days in September 1941 the Jews of Kyiv were massacred as Jews.