Legislative Stab in the Back for Crimeans 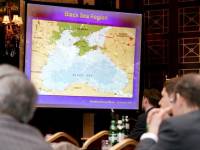 A law condemned by human rights organizations as discriminating against Crimeans and effectively recognizing the Crimea as Russian came into force on Sept 27 after President Petro Poroshenko ignored calls to veto it. The Law on making Crimea a free economic zone has a number of eyebrow-raising elements.  It declares Crimeans to be ‘non-residents’, envisages the establishment of customs control at the administrative border between the Kherson oblast and the Crimea.  The concept of import/export between mainland Ukraine and the Crimea is introduced, and contracts between mainland Ukraine companies and those in the Crimea are treated as ‘foreign’. In an appeal in August human rights groups warned that if the law came into force, Ukraine would be effectively recognizing the Crimea as Russian territory and allowing Ukrainian enterprises to continue business as usual with the Crimea.

The bill was passed with considerable irregularities, probably indicating that fierce lobbying was underway behind the scenes by MPs or others with strong business interests in the Crimea.  On Aug 14, for example, it was put to the vote twice. The first time it got far less support than required, yet a few hours later it was submitted again and passed with the tiniest of majorities.  An appeal to Poroshenko to veto the bill pointed out that according to reliable sources the draft bill voted on was different from that posted on the Verkhovna Rada website.  Curiously, the news that Poroshenko had signed the bill only came on Sept 26, though he signed it back on Sept 4.

The bill’s author is Batkivshchyna MP Serhiy Teryokhin who claims that its adoption will be a major step in returning the Crimea to Ukraine. He told Krym. Realii that because of Russia’s annexation, ordinary activities such as deducting tax, changing ownership papers, defending individuals’ and companies’ interests, could not be carried out as usual.  He says that his law sets out how this can be resolved.  He says that the idea is to create a free economic zone in which all those engaged in economic activities have almost all taxes and duties waived.

This is not the view of Andriy Klimenko, one of the authors of the above-mentioned appeal which was endorsed by around 20 human rights groups and organizations defending the rights of Crimean displaced persons.  He says that after analysing the bill he and colleagues are convinced that those who lobbied it were looking after their own personal business interests.  He notes that the Sevastopol Maritime Factory is owned by Poroshenko, other interests are owned by Yury Kosyuk, first deputy head of the President’s Administration, etc.

The calls for the law to be vetoed gave a number of reasons including even  use of the term ‘free economic zone’, understood throughout the world as a mechanism for attracting investment.  Ukraine’s use of the  notion arouses bemusement given the clear message from the March UN resolution which called on countries to do nothing which would imply acceptance of Russia’s occupation of the Crimea, and the sanctions imposed by western countries,

The law officially removes Crimea from Ukrainian territory and recognizes the administrative border between the Kherson oblast and Crimea as a state border, both de facto and de jure.

Customs, border and other forms of control, as well as customs and tax fees, are to be imposed for crossing between the Kherson oblast and Crimea.  This, as well as the terms import/export are clearly usual for state borders, not for an administrative border within a country.

The law defines businesses and individuals in Crimea as being ‘non-residents of Ukraine.  This immediately significantly reduces their rights according to Ukrainian legislation and clearly discriminates against Ukrainians who are already in a vulnerable position for having refused to take Russian citizenship.

Article 14 on internally displaced persons [IDP] envisages social benefits etc. being received by far less people than were actually displaced. The UN estimates the real number of IDP to be from 12 to 16 thousand. It places Ukraine in a very bad light if the international community recognizes the consequences of the annexation while Kyiv’s legislators understate it.

The law is now in force and rights groups are trying to assess its likely consequences.  They should not be underestimated since the law fails to provide any support for Ukrainian nationals remaining in the Crimea. At the same time it will prompt Ukrainian nationals to leave the Crimea and could be seen as creating the legal grounds for the peninsula to be recognized as a part of the Russian Federation.