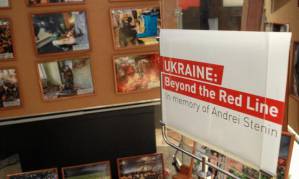 Russia’s Investigative Committee has faced - and failed - many tests to its credibility over recent months, but its new ‘genocide’ case against Ukraine is probably a record-breaker.

Committee Spokesperson Vladimir Markin  announced on Monday that the IC has initiated a criminal case against unidentified representatives of Ukraine’s leadership, armed forces, the National Guard and Right Sector.  All of these suspected villains are accused of having “issued orders aimed at the total annihilation of specifically Russian-speaking citizens living on the territory of the Donetsk and Luhansk republics”.

Over the last few weeks Russia has stepped up its barrage of accusations, unburdened by evidence, of ‘mass graves’, soldiers ‘raping and murdering where they sleep and eat’ and other war crimes.  The genocide claims serve the same propaganda ends, however there is a crucial difference, namely in the undoubted power wielded by the Investigative Committee.  It was Markin, for example, who announced the prosecution of Nadiya Savchenko, Ukrainian pilot taken prisoner by Kremlin-backed militants in the Luhansk oblast.  Despite the IC’s failure to explain how Savchenko ended up in Russian detention and lack of any evidence against her, she remains in custody facing serious charges.

Russia’s Investigative Committee may have the clout to initiate such criminal proceedings, but it also has the responsibility to behave in accordance with the law, and here it has failed abysmally.

Genocide is an extremely serious charge.  Over recent years Russia has, for example, always reacted most aggressively to Ukraine’s recognition of Holodomor or the manmade famine of 1932/33 as an act of genocide against the Ukrainian nation.

In bandying around its own charges of ‘genocide’ it should have shown some consideration for international law, or at very least, common sense.

Genocide, according to the UN Convention the IC cites is a crime of intentional destruction of a national, ethnic, racial and religious group, in whole or in part.

Russia’s investigators are certainly alleging intention.  Then the fog sets in.  Who are the alleged villains supposed to be targeting with their bombs and missiles?  More importantly, how can they specifically target Russian-speaking citizens?

Probably most people in Donbas speak Russian more often than Ukrainian.  This includes many of the soldiers now defending Ukraine against Russian aggressors and their local proxies, and civilians who are in no doubt that they are Ukrainian and that Donbas is part of Ukraine.

Russia is not an international tribunal and has no right to initiate criminal proceedings over alleged genocide or war crimes.  It has persistently – and contentiously -  asserted its ‘right’ to ‘defend’ Russians living in other countries.  With respect to Ukraine it has effectively shifted the focus to ‘Russian-speakers’ and ended up with a legal nonsense.

The IC concludes its devastating indictment with the following:

“All the above-listed facts and proof already collected by the Russian investigators confirm that the actions of individuals from the Ukrainian political and military leadership in issuing orders to annihilate the Russian-speaking population, are set out not only in Russian legislation, but in international law. With respect to the Criminal Code of the Russian Federation, the article on genocide envisages punishment of up to 20 years imprisonment or the death penalty”.

If shudders are warranted, it is not at the thought of heinous criminals about to get their comeuppance if Russia’s illustrious ‘investigators’ have their way.  Six Ukrainian nationals, including Nadiya Savchenko and the world-renowned Crimean film director Oleg Sentsov,  are already facing questionable charges in Russia. Sentsov is charged, together with three other opponents of Russia’s annexation of the Crimea, with ‘terrorism’. Russian prosecutors and judges are entirely undeterred by the lack of any basis for the charges against the above and Yury Yatsenko.  If confronted tomorrow with a Ukrainian soldier captured in Ukraine and just happening to be in Russian detention facing charges of committing genocide specifically against Russian-speakers, there are no grounds to hope that they would bat an eyelid.