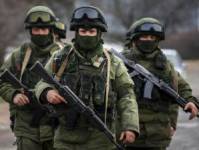 Russia’s Defence Ministry has proposed setting aside a special day to honour the Russian soldiers without insignia deployed for Moscow’s annexation of the Crimea this year.  The move coincides with letters from the same ministry denying the ever-mounting evidence of Russian soldiers fighting and dying in Ukraine.

What do you call heavily armed soldiers without insignia who refuse to say where they’re from?  It depends how great is your interest in ignoring inconvenient facts.  They became internationally known as ‘little green men’, a term that seemed ill-suited to the automatic rifles they were not holding for decoration.

In their euphoria that “the Crimea is ours!” [Krymnash], many Russians were happy to accept the term ‘polite people’, and it is this term that the defence ministry wants to immortalize.

Izvestia’s report is typically uncritical, so which words of the following come from the ministry are unclear. “Russia’s Defence Ministry has approved the idea of establishing October 7 as a new special day dedicated to the men in military gear without insignia who ensured safety and order during the holding of the referendum in the Crimea”.  The proposal was first made by a State Duma deputy Igor Zotov, and  there is no mention of who came up with the date. October 7 just happens to be Russian President Vladimir Putin’s birthday – and the anniversary of the killing of Anna Politkovskaya, one of his most vocal critics.

Izvestia explains that the term arose because the soldiers had no insignia, and would not say where they were from, but were “very polite”.  Putin is quoted as having later admitted that the soldiers were Russian.  “We were obliged to ensure the safety of residents of the Crimea in holding the referendum.  It should not be forgotten that there were 20 thousand Ukrainian soldiers with heavy equipment.  We had to do everything so that these weapons were not used against Crimeans”, the president explained”.

The manipulative nature of the reporting is breath-taking.  The soldiers who seized government buildings on Feb 27 held a ‘parliamentary session’ at gunpoint with this resulting in Sergei Aksyonov, whose party had only 4 seats in parliament, taking control.  It was Aksyonov’s puppet government which gave 10 days for the preparation of a ‘referendum’ on Crimea’s future, a referendum which was totally in breach of Ukraine’s Constitution.   This supposed referendum was slammed by the Council of Europe’s Venice Commission and Ukrainian election watchdogs but effusively praised by the group of neo-Nazi, fascist or some Stalinist politicians whom Russia invited to ‘observe’ the event.

In fact, however, even the Russian President’s Human Rights Council confirmed, perhaps inadvertently, that the ‘referendum’ had been falsified.

There had been tension on the eve of Russia’s intervention, but no violence, and those killed and / or taken prisoner over the next months were either Ukrainian soldiers or pro-Ukrainian Crimeans, including Crimean Tatar Reshat Ametov.

With the 1994 Budapest Memorandum guaranteeing Ukraine’s territorial integrity flouted by all other signatories and the West doing no more than condemning Russia’s actions,  Ukraine saw no possibility of resisting these so-called ‘polite’ but heavily armed Russian soldiers.

The situation was quite different in Donbas.  The motley group of pro-Russian activists with neo-Nazi leanings who had received training and support from Russia had no chance of gaining mass support.  In early April, therefore, ‘little green men’ appeared in Slovyansk and other east Ukrainian cities.  Local residents were in no doubt that the men were foreign, probably Russian.  When real fighting began, mercenaries were sent in large numbers, many from the Caucuses.  Ukraine’s army, helped by volunteer battalions, were defending their country and did it so well that by August a Ukrainian victory seemed assured.

Russia sent in troops, heavy military equipment and arms, and succeeded in imposing its will.  The cost in human life, suffering and death for Ukraine has been terrible.  Now, however, Russian soldiers were also being killed.

The lies this time have continued.  At the beginning of October the St Petersburg NGO Soldiers’ Mothers received a letter from the Defence Ministry in response to specific questions about particular young soldiers.  The letter, dated Sept. 22, does not provide the information requested, but states: “The information you give does not match the facts. Your conjectures are based on information propagandized in media channels controlled by those who are pro-Western and opposed to the Russian Federation.  Remain calm and respect the defenders of our Motherland”.

This was written by an official of the ministry which has been sending constricts to fight Moscow’s undeclared war in Ukraine.  Some young men have been told that if they didn’t sign the relevant document, it would be signed for them.  There are a large number of injured soldiers in, for example, a St Petersburg hospital. There are also graves of men, including nearly an entire paratrooper regiment whom the Russian regime duped or forced into fighting and killing in another country, and whose deaths that same regime is cynically trying to conceal.