12 thousand displaced people still without proper winter accommodationRussia plans fast-track removal of Ukrainian refugees to SiberiaPresident vetoes flawed displaced persons lawFurther calls for veto of internally displaced persons lawMysterious money supposedly allocated for refugeesKHPG statement on the adoption of a law on internally displaced personsLaw on Internally Displaced people comes in for criticismHelp for Forcibly Displaced PeopleNo mechanisms in place for dealing with refugees from the CrimeaCrimean Tatars and others face citizenship dilemmaRussian methods: Calls for Crimea’s return to Ukraine could get you imprisonedMGIMO historian fired for article comparing Crimean annexation to Hitler’s AnschlussInformation channels at warDonetsk Front in Putin’s Dirty WarScurrilous rumours used to spread fear and distrust in Eastern oblastsAutoMaidan activist shot at near ChongarRussian troops already deployed in mainland UkraineThe Crimea is our Home: Get your troops out!Crimean "referendum" a grotesque farceCrimean Tatars call on all Crimeans to boycott "referendum"
• Topics / On refugees 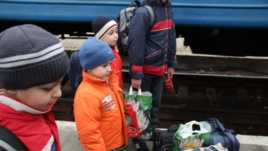 Ukraine still has no law to regulate help and protection for internally displaced persons despite the huge number of people in urgent need of such assistance and cold weather imminent.   A draft law has now been produced but the government is still in no hurry to pass it.  Human rights groups working directly with displaced people have issued an urgent appeal to parliamentary speaker Oleksandr Turchynov to personally ensure that the draft bill is put to the vote.

It is over six months now since the first Ukrainians were forced to flee their homes in the Crimea or eastern Ukraine.  Some had serious grounds for fearing persecution by the occupation regime in Crimea or Kremlin-backed militants in Donbas.  Others were driven from their homes by the military conflict.   The UN High Commission for Refugees estimates that some 200 thousand people have been displaced.  Some have recently returned to Donbas, but in most cases are returning to devastation.

On June 19 parliament finally adopted a law, but one so totally inadequate that human rights groups saw no choice but to call on the President Petro Poroshenko to veto it.

It is worrying that the law adopted was not the one that had been discussed with civic groups, and the text of the new bill was only tabled on the day of voting.  The bill only really allowed for registering IDP, while not addressing the very real problems IDP were facing.

On July 20 Poroshenko announced that he was vetoing the law, saying that it did not establish procedure for state assistance to displaced persons and failed to ensure coordinated and responsible work from state authorities, bodies of local self-government and their cooperation with the community in this area.  The law was criticised as largely declarative.

This was a promising move, as was the tabling in parliament on Aug 28 of a draft Law on Ensuring  the Rights and Freedoms of Internally Displaced Persons, No. 4490a-1.  This was drawn up in cooperation with groups actively helping IDP.

The Verkhovna Rada, however, did not consider the bill on Sept 16 although it was on the agenda.  Temporary accommodation in sanatoriums, etc. is clearly no longer appropriate and the cold weather could be only days away.  An open appeal, signed by the heads of the Ukrainian Helsinki Human Rights Union, the Kharkiv Human Rights Group, the Centre for Civil Liberties; Human Rights House, Kyiv; Almenda and Donbas SOS asks Oleksandr Turchynov to ensure that the bill is added to the agenda on Oct 7 and voted on as priority.