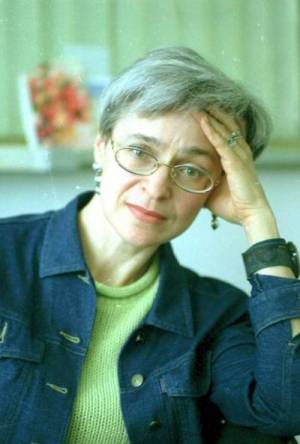 On 7 October, 2006, Anna Politkovskaya, Novaya Gazeta journalist, human rights defender, was gunned down by a hired killer in the lift of her apartment block in Moscow.

While 5 men were finally, in 2014, sentenced to long prison terms over the killing, nobody seriously believes that the prosecutor got even close to those who ordered the murder of one of Russian President Vladimir Putin’s most articulate critics.  Nor that any real attempts were made to do so.  There were grave irregularities in the investigation from the outset, and major questions, for example, regarding the FSB surveillance the journalist had been under for two months before the murder.

Anna Politkovskaya’s death was a devastating loss for Russia, but especially for those whose voices were otherwise seldom heard, particularly in the Caucuses.  Her books about the wars in Chechnya doubtless made her enemies in the Kremlin, among the leaders they installed in Chechnya and the federal forces.

It was also no accident that she was poisoned and stopped from getting to North Ossetia in early September 2004.  She had been heading to Beslan, where she would almost certainly have succeeded in negotiating with the terrorists holding well over a thousand children, teachers, parents and grandparents hostage.  The Kremlin lied from the outset about the attack on the school, the number of people held, and claimed – falsely – that the terrorists were refusing to negotiate.  The storming of the school on Sept 3 took place after explosions which an independent explosives expert, Yury Savelyev, believes could not have come from inside the building.  The suspicion is that they were from missiles hurled by federal forces at a school.  331 people died in Beslan, over half of them children, and almost all because of the storming of the school.