Russia to honour ’little green men’ in CrimeaFirst reports on Pro-Kremlin TV of Russian soldiers killed in UkraineEntire Pskov paratrooper regiment killed in Ukraine?More Russian conscripts forced to fight in UkraineAttacked for asking why Russian paratroopers died fighting in UkraineThe Russian Invasion and Deaths Putin didn’t mentionRussian NGO has list of 400 killed or wounded Russian soldiersIf Russia is not at war, then who is in those freshly-dug graves?Macabre Convoy: Cargo 200 from Ukraine to RussiaInvasion by any other nameHalf-empty or half-emptied?Poland knows about Russian ‘humanitarian convoys’. It didn’t let one in.Stand up to Putin: buy Polish apples!No Sanctions Game Changer?Will the West sleep through this final wake-up call?Russian LifeNews inadvertently told the truth about downed Malaysian airlineMilitants accused of deliberately shooting at Severodonetsk residential areaSent to be shotThe EU’s Opaque Dealings with UkraineWhose anti-Semitic and Homophobic Choice?
• Topics / News from the CIS countries 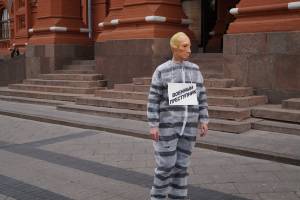 The Russian activist who donned a Putin mask, striped prison clothes and a sign reading ‘WAR CRIMINAL’ was released from custody an hour after being detained in the centre by police officers.  Maybe one of the illustrious law enforcement officers was informed of the headline on the civic monitoring site OVD.info: “War Criminal Putin detained in Moscow”.

The police had apparently been planning to accuse Denis Bakholdin of infringing the rules for holding public events (Article 20.2 of the Code of Administrative Offences).  Russian repressive legislation on public assembly allows only single-person pickets without obtaining permission from the authorities.   Even if we assume that Bakholdin, who walked down Manezh and a central street was holding a picket, he was doing so alone.  He did, of course, arouse attention with a large number of people being videoed having their photos taken with him.

Had the police decided to push the administrative charges, they would have needed to find all those people and presumably pin charges on them as well.

In short, a public relations disaster.

As disastrous, for those outside Russia, as the sycophantic ‘events’ to mark Russian President Vladimir Putin’s 62nd birthday.  The most extreme, from a group calling itself the Vladimir Putin Support Network is an exhibition entitled “The Twelve Labours of Putin”.  Those with the stomach for it can view the pictures on the network’s facebook page.  Or on the BBC and other western information agencies who just couldn’t help themselves.

Whether Putin himself will appreciate the obvious attempt at flattery in likening his actions to those of Hercules is not known.  It does not seem entirely improbable that his penchant for posing bare-chested on horseback or fishing may have given some adoring supporter the idea for some of the images.   More effusive adulation is described here.

There were plenty of less effusive messages for Putin on his birthday.  Some of them can be viewed here http://gazeta.ua/ru/articles/life/_kak-ukraincy-pozdravili-putina-s-dnem-rozhdeniya-luchshee-iz-socsetej/585158

Renowned Russian writer Vladimir Voinovych was brief and to the point: “Resign!”

It would be useful if Russian third-time president could note that people in other countries are by no means so aware of when their leaders’ birthdays are.  Unfortunately, though, there is no guarantee that he would draw the correct conclusion.