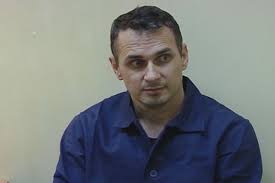 Russia’s Investigative Committee has refused to initiate criminal proceedings over the beating of Ukrainian film director Oleg Sentsov by FSB officers in the Crimea.  Sentsov’s lawyer Dmitry Dindze told Interfax that the IC had  passed such a decision ‘after considering’ Sentsov’s complaints.

The allegations of beating and ill-treatment aimed at extracting ‘confessions’ have been made on a number of occasions by both Sentsov and Oleksandr Kolchenko.

They place a serious question mark over the ‘confessions’ made by the other two Ukrainian opponents of Russian occupation who are now being held in Russia on ‘terrorist charges’.

It is likely that the European Court of Human Rights will take a different view over the circumstances of the men’s detention, transfer to Russia and the charges against them in general.  Sentsov’s application is already with the Court.

Oleg Sentsov who has won world renown for his films was detained in the night from May 10-11.  As well as his film work, Sentsov is the solo father of two young children, one of whom was present during the visitation and search by the FSB.  He was an active supporter of EuroMaidan and involved in peaceful protest against Russia’s annexation of the Crimea.

He had no connection with the nationalist Right Sector, yet has been accused of master-minding a supposed Right Sector ‘terrorist plot’.

The Russian investigators are unperturbed by the lack of any evidence or, in fact, any terrorist acts.  The lack of anything beyond a Molotov cocktail thrown at the Party of the Regions office is of particular significance given that all four men were arrested after the alleged terrorist acts were supposed to take place.

All of this makes Sentsov’s allegations of particular importance.  He has stated in court that he was tortured and subjected to degrading treatment in the Simferopol SBU building (now under the jurisdiction of the Russian FSB].  He says they were trying to extract testimony claiming that the leaders of Maidan and authorities in Kyiv had ordered the alleged crimes.  When he refused to do so, they told him that he would then be made the mastermind of the ‘terrorist plot’ and would face more serious charges.

There have also been attempts to strip Sentsov and the others of their Ukrainian citizenship.  These have been condemned by Sentsov who stresses that he signed no application for Russian citizenship which he rejects.

Four men prominent in opposing Russia’s occupation of their native Crimea have been charged with bafflingly absurd ‘terrorist charges’ which could carry 20 year prison sentences.