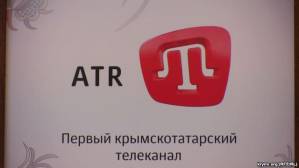 The Crimean Tatar channel ATR has accused the occupation authorities of waging an active campaign against the first and only Crimean Tatar television channel in the Crimea.

It recalls the letter reported here from the Centre for Countering Extremism, received on Sept 24.  This claimed that ATR “‘is persistently fostering the idea of possible repression on ethnic or religious grounds, is fostering the formation of anti-Russian public opinion and is deliberately stirring up distrust of the authorities and their actions among Crimean Tatars, with this indirectly creating the threat of extremist activities.”   The channel was ordered to provide all official documents and a list of all official members of staff.

On Sept 30 Sergei Shuvainikov, head of the ‘parliament’s’ committee on information policy and mass communication spoke of journalists “who are not very flattering in talking about Russian Crimea, look for shortcomings everywhere, make mountains out of molehills, and then present this to the residents of Crimea and the world community”.  He cited ATR as an example.

Then on Oct 3 the parliamentary newspaper “Krymskie izvestia’ published an interview with the deputy speaker in ‘parliament’, Alexander Formanchuk. He accused ATR of a conscious anti-Russian information policy and of pushing the view that the Crimea had joined Russia against the will of the Crimean Tatar people. He claimed that all the ATR news is based on undermining the authority of the Crimean leadership, local and central authorities.

He considers that “the information policy of the channel needs the appropriate reaction of the law enforcement agencies”.  “It’s time to make it clear that the Russian state does not tolerate the lawlessness of supposed freedom typical for Ukraine. In mainland Russia such actions are immediately stopped. I hope that this will be done and that the law enforcement structures will have something to say”.

ATR mentions earlier threats to the channel in May.

It stresses that the channel has never engaged in “propaganda” or “pushing ideas” and “inciting inter-ethnic enmity”. Its aims are to foster development of the Crimean Tatar language and culture; form principles of good-neighbourly behaviour in the Crimea’s multicultural society and providing objective information about the events taking place in the Crimea and beyond.

ATR notes, however, that this position has made it the target of a witch hunt, and it believes that the authorities’ next step could be to close it.  It points out that ATR is “not just a TV channel, but a symbol of Crimean Tatar revival in their homeland after Stalin’s Deportation, and a pivotal factor in their cultural and national identity. Therefore any actions by the authorities – either positive or repressive – with respect to ATR will inevitably be viewed as helping or acting against the Crimean Tatars”/