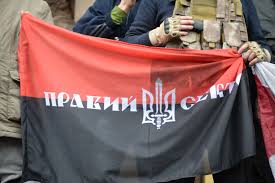 Russian attempts to fabricate anti-Semitic attack in Ukraine have yet again clashed head on with reality.  This time the Odessa Jewish Community has been forced to issue a statement denying every part of the ‘story’ after being deluged with anxious calls from around the world.

The claims were indeed alarming.  In an article entitled “Right Sector” has declared war on Jews in Odessa”, Izvestia asserted that “radicals” had desecrated graves and the monument to victims of the Holocaust with swastikas.  20 Jewish people had supposedly been savagely beaten up by ultra-nationalist Right Sector members and an anonymous police source was reported as claiming that another 36 robberies and attacks had been carried out by the Right Sector, all on members of the Jewish community.   All of this was eagerly repeated by Russia’s LifeNews and other pro-Kremlin channels.

None of the things claimed in these statements happened in the community – there were no meetings; no attacks; and we have not written any appeals or statements and do not intend to write them. Just the phrase alone that Odessa residents are planning to write to New York and ask the World Jewish Congress to ban a Ukrainian (!) political (!) organization should be enough to get a correct idea of these statements. “ The official statement notes that according to Jewish law the leader of the community is the rabbi, and that therefore any statements not from Abraam Volf, Chief Rabbi of Odessa and Southern Ukraine or the press service “are fakes (and sometimes provocation)”

It is not hard to understand why the Russian propaganda machine opted for a fictitious ‘leader of the Jewish community’.  The real leaders and authoritative voices in Ukraine’s Jewish community have been nothing but trouble for the official Russian narrative since the beginning of EuroMaidan.  Not only did they fail to provide graphic stories of anti-Semitic excesses and fears of pogroms under a ‘fascist junta’, but they publicly condemned such overt provocation and attempts to incite antiSemitism in Ukraine.

In late January 2014, Viacheslav Likhachev, the most authoritative researcher on anti-Semitism in Ukraine warned that attempts could be made by the Yanukovych regime to use supposed anti-Semitism as a way of silencing outrage if force were used against the EuroMaidan protests.  There were public statements expressing similar concerns from the Association of Jewish Organizations and Communities of Ukraine [Vaad Ukraine] and human rights groups.

This prompted a statement by the Chief Rabbi of Ukraine, Yaacov Dov Bleich in which he said that despite the persistent claims in the Russian media, anti-Semitic incidents in Ukraine are extremely infrequent.  He pointed out that the first act of anti-Semitic vandalism in the Crimea had taken place a couple of days after Russian troops were deployed on the peninsula.

The Russian media still tried to gain propaganda mileage out of that act of vandalism in Simferopol and again got caught out.  The image was used in a falsified report claiming that Rabbi Misha Kapustin of the Progressive Judaism Communities of Simferopol and Ukraine had been forced to leave Ukraine because of the fascist hordes.  The Rabbi had in fact told Juedische Allgemeine  that he had been forced to leave Simferopol for Kyiv with his wife and family, fearing for their safety because of his active protest and the appeal he initiated against the Russian occupation.

These are just a few of the examples that on March 23 prompted far-right Russian nationalist writer Alexander Prokhanov to assert on nationwide television that some Ukrainian Jews were “bringing on a second Holocaust”.  The Rossiya 24 presenter Evelina Zelenskaya got even more carried away and replied that Jews “brought on the first the same way”.

Since then Ukrainian Jewish leaders have continued to refute Kremlin lies and stereotypes.  In the meantime both the Kremlin-backed militants in Donbas, as well as the ‘Ukrainian Choice’ party of Putin’s main spokesperson in Ukraine, Viktor Medvedchuk, have not concealed their anti-Semitic views.

Perhaps for those reasons Russia had for some time largely focused on ‘fascist junta’ rhetoric, and given anti-Semitism a wide berth. Wisely, as this fresh fiasco has shown.