Stalingrad as latest step in re-glorification of tyrantNeo-Nazis in Moscow’s ServicePro-Russian separatists start their own anti-Semitic TV channelPro-Russian, anti-Roma, anti-Semitic and hunting out Ukrainian speakersThe Donetsk anti-Semitic leaflets – what should not be overlookedEast Ukraine crisis and the ’fascist’ matrixRussia continues its false narrative as defender of oppressed minorities in UkraineRussian propaganda claims Jewish organizations supporting Maidan are bringing on "second Holocaust"The Crimean referendum’s neo-Nazi observersPutin’s Neo-Nazi HelpersChief Rabbi and others dismiss Putin’s “anti-Semitic extremist” claimsRussian propaganda must be challengedWestern Media: Don’t distort the situation in Ukraine!Russia’s aggression poses dangers beyond Ukraine’s bordersCrimea: Anti-Semitic card and other provocation in time of siegeMr Putin: We ethnic Russians and Russian speakers don’t need protectionDangerously orchestrated Crimean exerciseRussia claims threat to its interests and life of Russian nationals in UkraineBlood and Berkut Sniper Bullets on the President’s HandsMustafa Dzhemiliev on Maidan: I’m proud of you, dear fellow Ukrainians
• Topics / News from the CIS countries

Stalin returns to the Russian Curriculum 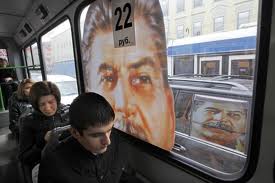 In the latest of many moves aimed at reinstating bloody dictator Joseph Stalin, the speech he made soon after Nazi Germany invaded the USSR is to be included on a list of main sources for senior students to study

Russia’s Ministry of Culture is drawing up a list of ‘100 main sources of Russian history’ for study in schools and higher education from 2015. The list is to include a speech by Soviet dictator Joseph Stalin.  No mention is made of other pivotal speeches, such as that by Nikita Khrushchev in 1956 denouncing Stalin.

The Russian newspaper Izvestia cites Mikhail Ipatov from the Ministry as asserting that the project “will help to reduce the number of speculative historical constructs based on opinions and judgements and distorting our country’s past”.

There have been many such moves to ensure ‘the correct’ approach to history since 2007.  In June that year Russian President Vladimir Putin told Russian teachers that there needed to be a greater focus on ‘the positive’ aspects of Russian history.   Since then the number of people who view Stalin as a positive leader has been steadily growing.

It is not that Stalin is praised as such, but there is a strong focus on Soviet ‘achievements’ during that period, while the Terror and repression, the millions of lives destroyed, are given little or no attention.  At the same time, access to the Soviet archives has become considerably more difficult.

The Ministry’s website does not provide any information at present, so the other material can only be guessed. It does seem likely that Izvestia would have revealed the most controversial material and would surely have mentioned Khrushchev’s speech, as well as a number of texts  would have been given a mention.

All historians Izvestia approached supported the initiative.  Yefim Rachevsky from the Tsaritsino No. 548 Moscow Education Centre found no problem in having repugnant figures in the list.  “A normal person cannot love Stalin, but it’s interesting what speech that swine just made”, he asserted.

Rachevsky’s statement is disingenuous.  Even if the background information contains mention of the million lives lost just in the first weeks of the War because of Stalin’s blindness and criminal incompetence, the speech made by Stalin on July 3, 1941 will inevitably be viewed in a positive light.  This is doubtless the intended effect and will make it even less likely that students will focus on Stalin’s crimes.

There is very little reason, in any case, to expect the background information to be objective and comprehensive.  Stalin’s speech presents a justification for the Ribbentrop – Molotov Pact by claiming that it was merely a non-aggression agreement. The secret protocol to the pact gives the lie to this pretence, although it was Poland which was the target of both countries’ aggression.  On the 75th anniversary of the signing of that pact in 2014  Russia responded angrily to any mention of the carving up of Poland.  On Sept 17 only one Russian newspaper (Nezavisimaya) even mentioned that this was the day in 1941 that Soviet troops, together with the NKVD, took over what was then Poland.

The speech chosen is, in short, designed to consolidate the key theme that the Soviet Union / Russia fought against Nazi fascism and to justify mass scale repression of so-called ‘traitors’ and enemy elements, requisitions and other measures which before the War had killed millions.

All of this in Stalin’s own words, addressing the Soviet people as “Brothers and sisters”.

Serious historians of, say, German history or the Second World War, must read Hitler’s Mein Kampf.   The same applies to the writings and speeches of Stalin for historians of the Soviet period.

There would be outrage if any speech made by Hitler were placed on the school curriculum.  School students in general lack the critical skills, historical knowledge, and, more often than not, the interest, to gain anything from the exercise.  At the same time inclusion of his texts without appropriate presentation and discussion could result in many students seeing him as just another boring bloke with something to say.

This is quite likely one of the aims of including Stalin’s speech in the list of most important sources.   In a country where there has never been truly widespread understanding of the scale of Stalin’s crimes, a country now led by a man who sees the collapse of the Soviet Union as the “greatest tragedy of the XX century”, this is yet one more dangerous retreat into Soviet-style lies.