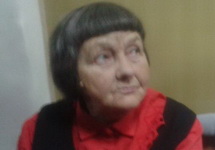 A Basmanny Court judge in Moscow has yet again postponed the hearing into Nadiya Savchenko’s appeal against her forced admission and psychiatric assessment in the notorious Serbski Institute.  The new hearing date is set for Nov 11, with its outcome entirely meaningless since the Ukrainian officer was forcibly taken to the institute on Oct 10.

The decision to adjourn the hearing was taken behind closed doors, with the press and public excluded.  Nadiya’s mother, Mariya Savchenko was also not allowed to attend.  Lawyer Mark Feygin demanded that Nadiya Savchenko be brought to the court, however the investigator claimed that this would interrupt the assessment, and could supposedly influence its outcome.

Since the assessment normally takes 30 days, the scheduling of the appeal against it for after this period is overtly cynical.  Since the latest period of detention runs out on Oct 30, Savchenko will probably have to be brought to the court then anyway.

It was learned at the end of August that Savchenko was to be forced to undergo a so-called psychiatric examination at the Serbsky Institute.

Savchenko condemned this ‘examination’ as illegal.  A statement was made public by her lawyer Mark Feygin in which she said that she “was illegally abducted from Ukraine, unlawfully brought to the Russian Federation and is being held here illegally” She said that she would be refusing to speak with the clinic staff; to give any kind of testimony; to answer any questions in writing or verbally; to fill in any forms or undergo any tests.

The defence have provided compelling evidence showing that Savchenko had been captured before the Russian journalists were killed. Neither this, nor the discrepancies in the investigators’ story has had any impact on the courts and it seems likely that they are simply handing down the rulings demanded of them.  The political nature of the detention and court proceedings is made abundantly clear by the court order from July 3 (and the investigators’ documents).  This order refers to the Donbas region of Ukraine as the Donetsk and Luhansk People’s Republics,

Information about Monday’s (non)hearing and the photo of Mariya Savchenko from Grani.ru