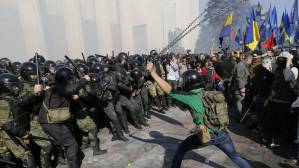 Trouble on Oct 14, the anniversary of the founding of the Ukrainian Insurgent Army [UPA] was expected.  There are always attempts to disrupt the traditional march held by UPA veterans, but this year was different for two key reasons.  One was the fact that the march coincided with the last parliamentary session before the elections, and the rightwing VO Svoboda wanted to use the occasion to try to push through a bill recognizing UPA fighters as also being veterans of the Second World War.  The second was the obvious benefit to Russia of any violent clashes on that day. The latter got what they wanted, although the provocation was too overt to go unnoticed.

The day looked set to be tumultuous for another reason.  With 364 days to choose from, President Petro Poroshenko decided to select October 14 as Day of Defender of Ukraine.  Feb 23, a day shared with Russia, undoubtedly needed to go, however the choice of a day closely associated with UPA makes confrontations even more inevitable.  As if they weren’t predictable enough.

The draft bill, on the other hand, did not even get enough votes to be added to the agenda.  Recognition of UPA fighters as equal combatants in World War II is a contentious issue in Ukraine, and one that would be better kept well out of the reach of politicians.  The role of UPA during WWII, and especially its Volyn branch in the ethnic cleansing in Volyn, remains vehemently disputed.  It is also fairly unrealistic to expect people whose fathers or grandfathers fought in the Soviet army against the Nazi aggressor (not for Stalin!) to understand how those who were waging war against Germany, the USSR and Poland, should be recognized as equally much veterans.  The opposite is probably also true,

It was initially reported that VO Svoboda’s failure to get the votes needed for the bill to be considered, and demands that the communist party be fully banned led to the disturbances outside the Verkhovna Rada in which a number of riot police officers were injured when protesters hurled smoke canisters and stones and around 50 protesters were detained.  In fact, though, it seems much more likely that the confrontation was planned in advance and not by those lobbying the bill.

There are various versions of what happened, with Anton Herashchenko, adviser to the interior minister, saying that he “could not exclude” Russian provocation, and both the VO Svoboda party and Right Sector denying any involvement.

The disturbances outside parliament were very similar to those on Dec 1, 2013 outside the president’s administration.  There are extremely strong grounds for believing that the December disturbances were orchestrated, with notorious provocateur Dmytro Korchynsky and his Bratstvo party involved.

On Oct 14 a Bratstvo flag was seen, though Korchynsky denies involvement.  It seems definite that another right-wing radical group calling themselves Revanche and announcing plans for the day’s events on their social network page played a very active role in the violence.  Correspondents from the website INSIDER write that they observed how a planned peaceful march (which normally involves elderly UPA veterans) turned into a violent attempt to storm the Verkhovna Rada.

Around 3 thousand turned up for the march organized by VO Svoboda which arrived without any trouble at parliament and began loudly, but peacefully making their demands.

Another column of protesters appeared with young men in balaclavas with red and black flags, and banners showing a skull with a knife between its teeth.  There were also people with Right Sector banners, though Right Sector later distanced themselves from the violence.

It seems that initially the first group were pleased at their arrival, but that changed swiftly as the young men marched up to the cordon of enforcement officers.

The square was soon full of smoke. The masked provocateurs, and INSIDER is surely correct in calling them such, tried to push their way into the Verkhovna Rada but were stopped by the riot police.

The radicals were attacking the police from behind the Svoboda activists, with the crowd mostly looking on unable to understand what was happening.

All of this is extremely reminiscent of the events on Dec 1.  The group involved in the confrontation and carrying a black flag with a skull and knife are the Revanche group who on their VKontakte page are calling for a real military junta to take over and wage war with Russia.

Their aim on Tuesday was overtly different with Ukrainian enforcement officers the target of a determined attack.

At one point Tetyana Chornovol stood between the violent protesters and the National Guard and tried to stop the violence.  The correspondents says that for a second it seemed as though the masked louts had backed off, but only in so much as they pushed those fighting with their fists ahead.

Video footage is likely to be scrutinized in the coming days by those determined to either spot the provocateur or spot the arch neo-Nazi.  Both searches are depressingly likely to be successful.

Whether Revanche are provocateurs or far-right radicals with a dangerously destructive agenda is not quite clear.  It is very apparent that there were people present whose aim was specifically to provoke trouble.

On Jan 1 this year, in the middle of EuroMaidan a fairly large number of people took part in marches to mark nationalist leader Stepan Bandera’s birthday.  Interestingly, some known supporters of UPA, such as historian Volodymyr Vyatrovych, considered the planned march divisive and destructive, and called on people not to go on it.  How many headed his call is not clear, nor whether he repeated it with regard to the Oct 14 anniversary.  It is a call worth repeating.

October 14 is certainly a religious festival in the Orthodox tradition, and a day remembering the Ukrainian Cossack tradition.  All true, however the reason the day provokes confrontation each year – and probably invites provocation – is the link with UPA.

Neither presidential decrees nor discussion of why this or that stereotype is wrong are likely to make the subject less contentious – and ripe for provocation.