Whose Revanche? Key suspects in the Oct 14 disturbances 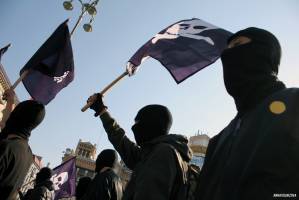 Nobody is admitting liability for the disturbances on Oct 14 when certain masked protesters tried to storm parliament and attack police.   A new radical group  calling itself Revanche and hankering for a military junta to take control may be the likeliest candidate though multiple questions remain.

Conclusions as to who caused the violence outside Ukraine’s Verkhovna Rada on Tuesday are inevitably coloured by the undeclared war Russia is waging against Ukraine and probably by the close proximity of parliamentary elections.  Political analyst Taras Berezovets has called the disturbances “a rehearsal by the Russian special forces before organizing a military coup in Ukraine”, while President Petro Poroshenko suggested that a “second front” had been created.  A number of similarities with the almost certainly orchestrated disturbances on Dec 1  2013, undoubtedly lend credence to suspicion that some of those at the mass meeting outside parliament came intending to cause trouble. On the other hand, Arsen Avakov, currently Interior Minister and candidate in the elections publicly stated on Thursday that  of two people arrested that day on suspicion of involvement in the disturbances, one was the son of a candidate from the right-wing VO Svoboda party, the other – one of the leaders of Ukraine’s skinheads. 18 other people detained, he said, had been released “for lack of proof”.  Avakov specified that the first suspect was the person seen on much video footage in a green top, with a black mask totally obscuring his face and hair.  All organizations present that day, including VO Svoboda, have disassociated themselves from the young man.  It was also announced earlier that a police officer had been arrested and accused of acting as agent provocateur.

VO Svoboda has denied any involvement in the disturbances, and many of the reports do suggest that the trouble began when others joined their previously peaceful rally.  Researchers of far-right movements have pointed to the involvement of a new radical group calling itself Revanche.  It is reports of the events which concentrate on the role of Revanche and, in one case, Syndicate that are used as sources of information below.

A march by veterans of the Ukrainian Insurgent Army [UPA] and supporters is held each year on Oct 14 to mark the formation of the army in 1943.   Views on UPA are divided in Ukraine, and there are often clashes.  This year serious forms of ‘provocation’ were anticipated as fodder for the Russian media which constantly pushes the Kremlin’s line on ‘fascist’ parties in power, and the supposed rise of ‘neo-Nazism’.  They were also likely because VO Svoboda had organized the march to end with a rally outside parliament calling for the adoption of its bill on declaring the UPA a combatant army fighting for Ukraine in the Second World War.  The bill was proposed 7 times on Oct 14, but never got enough votes to be added to the agenda.   There were a few thousand people outside the Verkhovna Rada demanding that the bill be passed, but there does not seem to have been any trouble until another column of protesters arrived.  The latter including people wearing balaclavas and with red and black flags and banners showing a skull with a knife between its teeth. There were also people with Right Sector banners.

After the last attempt to get the bill put on the agenda, violence broke out, with firecrackers, smoke bombs being let off, items being hurled at the police and fighting., as some of the protesters tried to storm parliament.

Correspondents from Insider point to major similarities with the tactics of provocateurs on Dec 1 last year in which Dmytro Korchynsky a notorious provocateur and his Bratstvo party certainly took part.  Apparently Bratstvo flags were also seen on Oct 14, however Korchynsky and the party deny any involvement in the trouble.  As do VO Svoboda, Right Sector and others.  Oleh Lyashko, head of the Radical Party which Korchynsky’s wife is running as a candidate for, was also suspected of being behind the trouble and has also denied any part in them.  Svitlana Rogovska for the web publication Gordon.ua spoke with all groups present at the rally, including members of the Black Committee and the Committee for the Release of Political Prisoners.  The list of over 100 names that these organizations consider to be political prisoners or to have been unfairly detained under President Viktor Yanukovych or later includes people whose cases are by no means universally considered to be politically motivated.  Rather strangely, the two organizations claim to have been hoping that a draft bill almost certainly shelved back in March offering a far-reaching amnesty would be put on the agenda.  Oct 14 was definitely the last chance for the current parliament, but a chance that was near infinitesimal.  While both organizations also deny taking any part in the disturbances, Bohdan Tytsky from Black Committee claims that since it was the last opportunity “we were demanding that this draft law was at least put up for consideration, and ideally, passed. That did not happen, which angered the protesters and clashes began”. 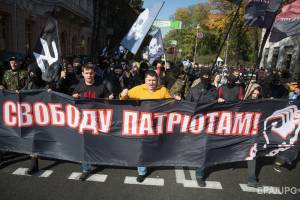 Tetyana Bezruk, a researcher into far-right political movements, points out that Oleh Lyashko from the Radical party has been vocal in supporting the demands regarding these ‘political prisoners’ since March.  She sees the disturbances as an effort to reduce VO Svoboda support at the elections in two weeks, but stresses that the main beneficiary of any such stunts is Russia.

Rogovska investigates the role of two other organizations, neither of which was well-known before.  Revanche attracted the attention of people closely following the far right during a torch procession in memory of Nebesna Sotnia, or ‘Heavenly Hundred’  - the slain EuroMaidan activists.  It was the flag with its skull and knife that Rogovska says attracted her attention and led to associations with Italian fascism which she believes should be viewed as neo-fascist.

Members of both Revanche and Syndicate also say that they “did not see” their activists among those responsible for the disturbances.

In fact this means relatively little with respect to any organization present on Tuesday since the people causing the trouble were all in masks.

The only person involved in any of the organizations who has pointed to specific culprits is well-known blogger Olena Bilozerska who writes on her Live Journal blog that the young men who tried to storm parliament, were from Revanche.  Interestingly, she says that they call themselves ‘ardiytsy’. This was immediately denied by a member of Revanche, however ‘ardity’ were a storm division within the Italian army in WWI. Later some of them – the Brown-shirts were to join up with Benito Mussolini.

Rogotska’s figures for people detained differ somewhat from the numbers mentioned by Avakov.  She is aware of 10 people having remained in detention and not been released to face administrative charges only.

All detentions appear to have taken place after the events, making it quite conceivable that the choice of culprit was arbitrary or based on items of clothing, etc. that can be easily changed.

Of those detained, 5 were from Syndicate; three from Black Committee, two of whom are minors; two from Revanche.  One Syndicate person and the two Revanche members were later released.

As mentioned, Avakov names two other people now in custody one of whom, at least, via his father, appears connected with VO Svoboda.  Two different MPs from the latter came conflicting reports of whether Svoboda members had been detained.

Interestingly, Anton Herashchenko, adviser to Avakov, refused to give information to Rogovska regarding party affiliations of those detained on the grounds that this could be used for political purposes.  The Minister appears less bothered by such considerations. His party, like that of Lyashko, does stand to gain from any reduction in support for VO Svoboda.

Information about the presence of members of Revanche and Syndicate first appeared on Oct 14 in Social networks.  Vitaly Cherny, spokesperson for Bratstvo, whose role in the orchestrated disturbances on Dec 1 is widely recognized, says that he’d heard of Syndicate but that they did not work together and of Revanche he knew only that it was a youth formation.

People from both Syndicate and Revanche were just as categorical in denying any connection with Korchynsky and his Bratstvo followers.

Syndicate can be found on facebook and on their own site http://sindikat.info/  Aside from being a group of Ukrainian nationalists who claim to be united by joint work for the defence of those near to use, they seem to position themselves as being against oligarch rule in Ukraine.

According to Yevhen Chepelyanksy, Syndicate arose at the beginning of EuroMaidan in order to defend the rights of workers and human rights in general.  “Now, during the crisis, there are many cases of people not being paid, and of fraud, and we decided to help such people”.

He says that they have taken part in the anti-terrorist operation in Donbas, and estimates that there are around 100 active members. In an earlier interview given by Leonid Kiyanytsa, Syndicate is described as “an association of Ukrainian patriots and supporters of the social struggle against the power of the present corrupt pseudo-elite, more broadly, against the system of merchantile-bureaucratic relations on which it’s based”.   They do not want a new revolution, but to finish the one which has already begun.

There appear to be radically different views as to the importance of Revanche.  According to a person who insist on renaming anonymous, these are around 5 or so 17-year-old marginalized figures who dabble in Italian fascism and dream of a military coup in Ukraine.  This view does not appear to be shared by researchers on far-right movements such as Viacheslav Likhachev and Anton Shekhovtsov.

Revanche’s own VKontakte page was fully of plans for Oct 14 a month ago. “The power structure of oligarchs and liberals has demonstrated its ability to adequately react to the challenges of history. We need a tough power structure made up of military volunteers who will finally get on with a full-scale war with the foreign and internal enemies.  Our motherland will be saved by a junta!”

In a post on Sept 26 they call on supporters to come on Oct 14 in balaclavas, black shirts and with black flags with the skull. “Be ready for an unforeseen turn of events. You should get ready for it and understand yourselves what you should equip yourselves with”.

A spokesperson for Revanche, ‘Cherny Patsyuk’ claimed that none of the above was in any way sinister or incriminating.

He says that the organization’s supporters took part in EuroMaidan, then went to Donbas.  They became a separate movement after Maidan, and says they have a core of 10-12 active members.

Theirs is not an organization, he stresses, but a kind of “group of cultural futurists” and asserts that the interest in Italian fascism is about aesthetic matters with a great impact on Italian fascism having been made by cultural figures. “Otherwise we don’t have anything to do with fascists”.

What any of the above actually means is not overly clear to the uninitiated, but in any case, the more pressing question is how much the organization had to do with the trouble on Oct 14.   Those disturbances came on the heels of another supposedly spontaneous protest by contract soldiers, and both seemed remarkably well-organized, Whether Revanche – or any of the groups present that day – were capable of controlling such events is difficult to say.  Arriving in masks and causing trouble is a much easier task.  So too is working out who benefits from ensuing chaos and violence.