Legislating murder, abduction and land-grabs in the Crimea 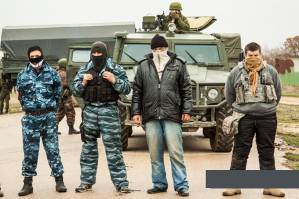 Russia may soon adopt a law which would waive any liability by the armed paramilitaries in the Crimea who have murdered, abducted and beaten up opponents of Russian occupation, as well as seizing land and assets.  Or who will do the same, since the impunity would be till Jan 2015

On Oct 14 Russia’s President Vladimir Putin claimed to be hearing about disappearances in the Crimea for the first time, saying that he didn’t understand who was responsible and why.  Two days later, Sergei Aksyonov, the Crimean ‘prime minister’ installed at gunpoint after Russian soldiers seized government buildings in Simferopol, spoke at a press conference in Moscow.  He warned that 100 thousand members of what he calls Crimea’s ‘self-defence’ could end up in prison, and lobbied for the draft bill his ‘government’ has drawn up.  This would totally absolve all ‘self-defence’ paramilitaries and officials from any liability for actions since Russian troops first seized control in the Crimea.  If that were not enough, the bill also waves liability for these same paramilitaries’ actions in the future.

Aksyonov’s only stipulation for this legislative carte blanche is that the paramilitaries and officials “were not seeking personal gain in taking decisions”.

This means, presumably, that, failing evidence of some ‘personal gain’, there will be total impunity for the paramilitaries seen on video abducting lone Crimean Tatar protester Reshat Ametov from outside parliament in Simferopol.  Ametov’s body, showing clear signs of torture, was found on March 16.

We are talking about legislated impunity, it should be stressed.  There is no evidence at all that the authorities in occupied Crimea are investigating Ametov’s abduction and murder.  There is little or no sign of them investigating the disappearances of other civic activists and young Crimean Tatar men.  Two young men were positively abducted in the early evening and despite all details being available, including a description of the van and its number plate, they have not been found.

According to Roman Nikolaev, Crimean rights activists fear that the proposed past and future ‘amnesty’ will mean further forced seizures of property in the Crimea.  He points out that this has been one of the main areas of ‘activity’ of these paramilitary units.

The narrative from Moscow and Aksyonov is that the paramilitaries were formed to ensure the safe running of the so-called referendum on March 16.  Nikolaev gives a different version, saying that they were formed in February with active involvement by Russia’s security service [FSB].  His account of their activities since that time coincides with numerous reports from international structures and NGOs which have repeatedly noted the paramilitaries’ role in abducting people, beating up journalists and various forms of pressure, including violence, against any opponents of Russia’s occupation of the Crimea.   A large number of these ‘activities’ are classified in both Ukrainian and Russian criminal codes as grave or particularly grave crimes.

Nikolaev believes that the reason the occupation regime is in no hurry to dissolve these units is that they are useful in appropriation of land.  The first such occasion was on March 26 when two groups of armed men in camouflage, calling themselves “Aksyonov’s self-defence” seized the buildings of the state wine factory Livadia.  At the end of April, a similar attack was carried out of the Ukrnafta offices in Feodosiya, with the armed men seized documents and computers, and also abducting three heads of the company branch. It was learned later that the entire Ukrnafta company in the Crimea had been taken over by a hastily registered share company called Krymoil.   There are a number of such examples, with the pace increasing after a law was passed making mandatory appropriation of property much easier.

Some of the numerous seizures are presented as ‘nationalization’.  All are carried out by armed thugs from the so-called ‘self-defence’ units.

The first of the seizures, Ametov’s murder and numerous abductions all preceded the adoption in Russia of a law “On the People’s Militia in the Crimea” on June 11. This gave legal recognition to the paramilitaries and also envisaged funding from both the Crimean budget and civic organizations.

It must be stressed that the June law only envisaged this ‘people’s militia’ taking part in maintaining order, etc.   The next step would go much further.

The draft bill tabled in Russia’s State Duma proposes amendments to current legislation which waive any liability for the actions of these so-called ‘people’s militia from Feb 27 2014 to Jan 1 2015.  It is certainly no easy task to find a way of justifying legislated lawlessness.  The authors of the bill propose naming all actions of the paramilitaries, as long as they weren’t for personal venal end as “carried out in a state of extreme necessity”.

In international law, there is no way that a country could justify murder or torture as “acts of extreme necessity”, but optimism that this will lead to the law being rejected is probably unwarranted.  Putin’s puppets in the Crimea also deny any wrong-doing and with their people now holding leading posts in the prosecutor’s office and police, denial of all such crimes and failure to investigate reports are guaranteed.