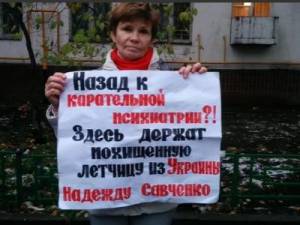 On Monday people in Moscow held single-person pickets outside the notorious Serbski Institute where Ukrainian officer Nadiya Savchenko is undergoing a forced ‘psychiatric examination’.   They stood with placards reading “They torture POWs here”; “Free Nadiya Savchenko!” and “Back to punitive psychiatry?  Pilot Nadiya Savchenko, abducted from Ukraine, is being held here”.

The organizers did not have permission to hold a protest (and would almost certainly not have got it) leaving single-person pickets as the only option.  Around 10 people took turns to stand alone with their banners. 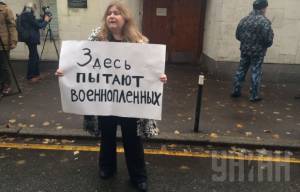 The organizer Yekaterina Maldon explained: “We want freedom for Savchenko who was illegally abducted in Ukraine. She is a prisoner of war and they’re using punitive psychiatry against her”.  Another picketer, Larissa added: “You can’t treat people like that. Unfortunately whether Nadezhda [Russian for Nadiya] is freed depends on the first person in the country. Our protest is unlikely to influence Putin, but we must do what we can for her release as soon as possible.”

The Serbski Institute earned its bad reputation in Soviet times and it is unfortunate that it is being used now in cases where there are simply no grounds for a psychiatric examination.  Savchenko’s lawyers reported over the last few days that she is being held in conditions which can be considered a form of torture since the constant lighting and 24-hour surveillance prevents her from sleeping.  In breach of Russian law and international standards, she is also being prevented from speaking privately with her lawyer.

All of this is despite the fact that the court has effectively blocked her appeal against the psychiatric examination which has now been deferred until after the examination is over.

At the end of August, Nadiya Savchenko issued a statement via her lawyers protesting strongly against the psychiatric ‘examination’.  She said that she would be refusing to give any testimony, answer any questions etc., fill in any forms or undergo any tests.

Although Savchenko’s appeal hearing was deferred until after the examination with the excuse given being that the examination must not be interrupted, a court hearing is due on Oct 27 on whether her detention is to be extended.

Savchenko’s treatment – her detention and prosecution and now the so-called examination – has been marked by total contempt for the rule of law and it is unfortunately probably unrealistic to hope that the judge on Oct 27 will heed the law and his or her oath, not instructions from above.

Savchenko was taken prisoner in the Luhansk oblast by militants from the self-proclaimed Luhansk People’s Republic on June 17 or 18.  Two days later a video appeared of her being interrogated by the militants. She demonstrated courage during the interrogation and refused to provide the information the militants demanded.

Russia has effectively abducted five Ukrainian nationals and is holding another in custody on highly suspect grounds.  Oleg Sentsov, Oleksandr Kolchenko, Gennady Afanasyev and Oleksy Chirny are all from the Crimea and all actively opposed Russia’s annexation of their homeland.  They were arrested at different times in May and after interrogation allegedly with the use of torture were taken to Moscow where they are facing positively far-fetched ‘terrorist’ charges.  Chirny has also been subjected to a Serbsky Institute ‘examination’.

Yury Yatsenko, a final law student from Lviv has been held in custody, supposedly awaiting deportation since May.  In August the Russian authorities suddenly charged him with equally dubious charges of ‘smuggling explosives’.