Russian rights activist investigating soldiers’ deaths in Ukraine arrestedRussia continues lying about solders’ deaths in UkraineFirst reports on Pro-Kremlin TV of Russian soldiers killed in UkraineEntire Pskov paratrooper regiment killed in Ukraine?More Russian conscripts forced to fight in UkraineAttacked for asking why Russian paratroopers died fighting in UkraineThe Russian Invasion and Deaths Putin didn’t mentionRussian NGO has list of 400 killed or wounded Russian soldiersIf Russia is not at war, then who is in those freshly-dug graves?Macabre Convoy: Cargo 200 from Ukraine to RussiaInvasion by any other nameHalf-empty or half-emptied?Poland knows about Russian ‘humanitarian convoys’. It didn’t let one in.Stand up to Putin: buy Polish apples!No Sanctions Game Changer?Will the West sleep through this final wake-up call?Russian LifeNews inadvertently told the truth about downed Malaysian airlineMilitants accused of deliberately shooting at Severodonetsk residential areaSent to be shotThe EU’s Opaque Dealings with Ukraine
• Topics / News from the CIS countries 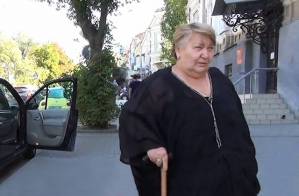 Ludmila Bogatenkova, the 73-year-old head of a regional Soldiers’ Mothers Committee in Buddyonovsk was released from detention on Monday, Oct 20.  The reason for this apparently humane move is : Bogatenkova’s state of health made the authorities fear that she would not survive the detention, and her arrest had already received wide media coverage.

As reported here, Ludmila Bogatenkova and her committee have been actively investigating the death of Russian conscripts and contract soldiers in Ukraine.  The major offensive against her since Oct 17 began with a search of the Soldiers’ Mothers’ Committee premises.  This revealed nothing that could legitimately be of police interest.

Bogatenkova was back at home when the investigators turned up and arrested her on suspicion of ‘fraud on a particularly large scale’.

A court on Oct 18 ordered that the 73-year-old who is in poor health, with a number of serious illnesses, and needs daily medication be remanded in custody. As if this were not enough, she was taken by car to Pyatygorsk, a city some 140 kilometres away.  There, however, the SIZO [detention centre] staff refused to admit her because her condition was so life-threateningly bad.  Despite this damning verdict on the Russian court that issued her detention order, she was still held for two nights in a police holding facility in Buddyonovsk.

Bogatenkova had refused to accept the lawyer whom the investigators provided and insisted on her own choice.  Andrei Sabinin was with her on Monday after her release.  He told TV Dozhd that she was in a very poor state, with high blood pressure and her hospitalization was being considered. (Update:  On Tuesday Ludmila Bogatenkova was admitted to hospital, in a cardiology unit).

Sabinin says that although the investigator has the right to issue a decision to release a person from detention, this case is quite unique, given that Ludmila Bogatenkova had been remanded in custody by a Russian court on Saturday and then released by the investigator on Monday.  He believes the publicity that her arrest received was a factor in her release.

Ludmila Bogatenkova has now been released on a signed undertaking ‘not to abscond’.  She has difficulty moving without assistance and would die without daily medication, making any suggestion that she might try to hide preposterous.

As is everything in this shocking case.

As reported,   human rights colleagues are unanimous in viewing Bogatenkova’s arrest and detention as an act of intimidation because of her work.

It seems most likely that this extraordinary case is linked with her active investigation of the deaths that the Russian authorities are trying to conceal or lie about – those of soldiers and conscripts who died fighting in Russia’s undeclared war against Ukraine.  On Aug 28 her Committee drew up a list of around one hundred Russian soldiers killed and a further three hundred injured.  At the time Bogatenkova told TV Dozhd that the list had been put together from various sources in the armed forces which, for obvious reasons, she could not reveal.  It was sent to the President’s advisory committee on human rights.

Bogatenkova also sent the human rights council information about the deaths of 9 contract soldiers from the eighteenth mechanized infantry brigade.

Sergei Kryvenko from that Council made it clear that he and his colleagues viewed the arrest as linked with Bogatenkova’s investigation into the deaths of soldiers and promised that they would demand an explanation from the Investigative Committee.

It was on the basis of the letter Bogatenkova wrote that Ella Polyakova, head of the NGO Soldiers Mothers of St Petersburg and member of the human rights council,  wrote to the relevant department of Russia’s Investigative Committee.  The letter asked for a check to be carried out of the death of servicemen in July and August and for a criminal investigation to be initiated over supposed fatal accidents or suicides while conscripts were on training exercises.

The letter pointed out that the authorities should have initiated the check themselves and warned that if the military investigators refused to initiate such investigations, they would be forced to publish information about this in the same media which posted the reports of the men’s death.  No answer has yet been received.

In the meantime secrecy and subterfuge prevail.  Relatives have clearly been placed under pressure to conceal details about  – or even the fact of -  a soldier’s death. Bereaved wives have been told that their husbands had ‘resigned’ from the military (if they were on contract work) before they died.  This also has practical ramifications depriving widows, often with children, of the assistance which they could otherwise expect.  Relatives are told that their husbands / sons died, for example, of heart failure or committed suicide. Moscow’s line has consistently been to deny the involvement of Russian forces.  Where absolutely forced to acknowledge that a Russian soldier was fighting, it is claimed – and pushed in the pro-Kremlin media – that he had taken ‘leave’ which he used to go and fight in Ukraine.

, initiator of the Cargo 200 from Ukraine to Russia project, as of the middle of October, 4, 360 Russian servicemen had been killed in Ukraine.  She says that the Russian defence ministry has admitted to 900 deaths.

With a number of journalists and NGOs stubbornly refusing to stay silent, repressive measures or attempts to frighten people into keeping their mouth shut have also been applied.

Lev Shlosberg, an opposition politician and journalist in Pskov was seriously attacked just days after he divulged information about the Pskov paratroopers whose death in Ukraine Russia had been trying to conceal.  It appears that virtually an entire regiment was killed.

The St Petersburg Committee of Soldiers’ Mothers was declared a ‘foreign agent’ a few days after it began revealing information about soldiers being killed in Ukraine.

The charges against Ludmila Bogatenkova, the fact that a Russian judge was willing to remand her in custody despite the obvious danger to her health and lack of any objective need for such a harsh measure, speak for themselves.

Please help circulate information about this case and about the investigations into the deaths of Russian soldiers that Moscow is so clearly trying to silence, together with those brave individuals who speak out.