Thousands of soldiers prevented from voting 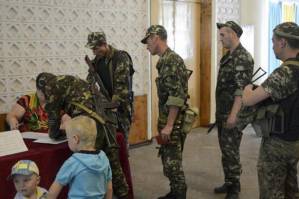 Soldiers who are in the zone of the ‘anti-terrorist operation’ in Donbas will be unable to vote in the parliamentary elections at the end of October, the Committee of Voters of Ukraine [CVU] states.

It notes that despite the public’s expectations, the Verkhovna Rada failed to introduce amendments to electoral legislation which would have enabled military servicemen from the ATO zone to vote in the elections. Two draft bills had been tabled, with one also pertaining to security at polling stations in Donbas; cancellation of unused ballot papers and the holding of repeat elections in regions where the elections were not held.

The second bill would have given soldiers the right to vote by usuing military tickets, enabling them to cast their vote according to where they are based.  This is the system currently in place for conscripts.

Neither bill was even placed on the agenda.  CVU points out that without these amendments thousands of soliders will be prevented from exercising their electoral rights.  It also stresses that Ukraine’s electoral legislation needs significant changes.