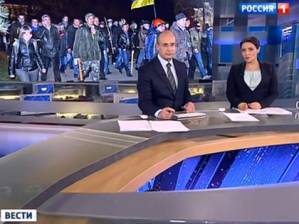 This is diametrically opposite to the assessment of relations with China.  19% are convinced that there are friendly relations between the two countries; 25% - good-neighbourly; and 35% - normal [as in OK].

79% of Russians consider the largest western countries to be Russia’s opponents who are using Russia to resolve their own problems.  Only 8% view the USA and European countries as Russia’s partners with common interests. However 66% believe that Russia needs to settle its relations with the USA and other western countries.  Only 25% saw no need to establish mutually beneficial and friendly relations.

Respondents agreed that Russia was more isolated from the west than at any time in the last 20 years, however 59% were undisturbed by that, with only 36% expressing concern at Russia’s growing isolation.

The number of Russians who believe that the current Ukraine crisis will result in a new cold war has reached its highest ever and stands at 40%.  The Levada Centre points out that no other conflict, including Chechnya, has aroused such pessimism in the last 15 years.

79% believe that western countries in criticizing Russian policy in relation to Ukraine are trying to weaken Russia.

On the other hand, more than half (55%) believe that Russia should follow its own economic and political interests pertaining to CIS countries, but not interfere in the internal affairs of its neighbours.

The worsening in the foreign political situation and increase in anti-Western rhetoric have resulted in an increase in the sense of threat from the western world.  84% consider that Russia now has enemies, this being the highest finding in all the years that surveys have been carried out.