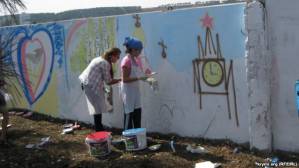 Ukrainian rights activists and specialists on children’s rights warn of widespread violation of the rights of young people growing up in children’s homes in the Crimea, particular through their being forced to take Russian citizenship.  They report also that under Russian occupation, the system of adoption built up over many years is being destroyed.

As reported here, problems have arisen because Ukrainian citizens receive their own passport (an internal document) at 16; in Russia – at 14.  Radio Svoboda’s Crimean Service quotes Ludmila Volynets, former head of the backup department of Ukraine’s presidential representative on human rights, says that the administration of children’s homes are forcing the young people, once they’ve turned 14, to take Russian citizenship.  She adds that by no means all of them wish to.  She says that some have been forced to do this against their will, and a number have been sent away from the Crimea for refusing.

Two young girls from a home in Simferopol were forcibly sent to Kyiv at the decision of the Mayor’s office after they refused to take Russian citizenship. Volynets says that the Simferopol authorities simply contacted the Kyiv administration and told them that they were putting the girls on the train and they needed to be picked up.

In all 22 young orphans have been removed from the Crimea for such refusals. In the case of the two girls from Simferopol, the Kyiv authorities had enormous difficulty persuading the authorities in Simferopol to send an adult to accompany the girls.  Volynets says that they will be adopted in the near future.

Chances for adoption have been reduced

Volynets says that orphans and young people growing up without parents who are, for various reasons in mainland Ukraine have been taken off the primary list of orphans. They’ve lost the Crimea’s commitment to provide them with accommodation when they turn 18 and very many other benefits due them from the authorities of the place where they became orphans.

Since the end of February the Ukrainian authorities have not received information from the Crimea about children subject for adoption.  Instead they have received requests to send the documents of young people arriving from other parts of Ukraine (presumably Donbas) and that they too have been made Russian nationals.

Volynets says that all such facts will become part of the application already lodged to the European Court of Human Rights.  She mentions also that before the so-called referendum on March16 143 orphans were made Russian nationals.

Organization of the adoption process is on a higher level in Ukraine and after Russia’s annexation of the Crimea, that system was destroyed. This is the view of Talina Kravtsova, the head of family law and the Yegorov, Puginsky and Afanasyev law firm.

There were 5 thousand orphans and children deprived of parental care, she says, and only 700 of them were in orphanages. The others were with substitute families.

There were also a number of programmes for adoption of children by families in mainland Ukraine.  All such programmes have been stopped, with Ukrainians being treated as ‘foreigners’ and falling under the prohibition on any but Russians adopting.

People who had already found children to adopt in the Crimea are now unable to do so, and the procedure they went through is long.

There were also family-type homes in which there were only from 5 to 10 children with the system clearly aimed at ensuring a family environment, rather than institutional atmosphere.  Russia has no such system and the homes in question have become institutions with 30 or more children.

According to Volynets the occupation authorities did agree to make an exception with the family-type homes and designate all of them foster homes which can receive state funding.  She says, however, that many foster parents were then forced to take Russian citizenship at the threat of otherwise losing the children.