45% in Donetsk oblast will not vote 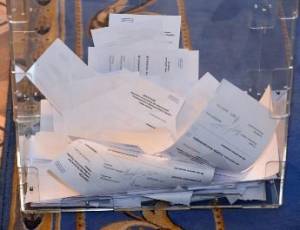 According to the Committee of Voters of Ukraine [CVU] 1.5 million people in the Donetsk oblast (45%) will not take part in the parliamentary elections on Oct 26.  In the Luhansk oblast people in the territory bordering on the zone of fighting are frightened to vote.

The deputy head of the Donetsk regional CVU Oleh Hryshyn explained at a press conference on Wednesday that out of 21 electoral districts, the elections will definitely take place in 8 districts only, with another 4 in question. It is known that 9 districts will not take part.

One positive feature is that there is political competition at the districts which will be taking part.  An interesting, possibly significant, fact is that in Donetsk which is under the control of armed militants, visual campaigning material in favour of the ‘Opposition bloc’ is on display.  This bloc was formed after the Party of the Regions collapsed, and mainly contains those politicians from the party in power during the presidency of Viktor Yanukovych who are hoping to remain in parliament.

Oleksy Svyetikov, head of the Luhansk regional CVU says that in the Luhansk oblast the elections will take place in 5 districts (one fully; in 4 – partially).

“The campaign is pretty dirty, with 40-45 candidates in each district, with most of them technical candidates, and so forth. It’s also worth noting that people are afraid to vote, especially in areas adjacent to the front.  After all members of the LPR [the self-proclaimed Luhanks people’s republic] have stated clearly that they’re against the elections.”

Oleksandr Ukhmanovsky from the Mykolaiv regional CVU, says that the biggest problem in his oblast is vote-buying.  He explains that there are 2 or 3 candidates in each district from different parties who are actively involved in indirect vote-buying.  He points out also that some local candidates, including civic activists, who actively helped the Ukrainian military before the elections, have been refused registration. Nonetheless attempts at buying votes are less wide-scale than during the parliamentary, and there is virtually no use of administrative resources.

According to Oleksandr Klyuzhev from the election network OPORA, around 190 thousand people have changed the place where they will cast their vote.  This is 20 thousand more than during the presidential elections, but does not mean that internally displaced people have been properly informed of such a possibility.

Klyuzhev also points out that the elections are formally taking place everywhere because of the number of single mandate constituencies., meaning that even in the areas under the control of the armed militants there are majoritarian candidates appointed by their parties.  He says that a negative aspect of the campaigning in the Donetsk oblast is rhetoric about division of the regions.  Although nobody openly makes separatist calls, some candidates use the colours of the Russian flag in their campaigning.