Whose “widespread use of cluster munitions”? 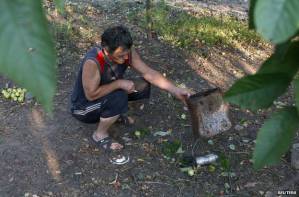 A quick Google check will find multiple reports, citing Human Rights Watch, asserting widespread use of cluster bombs by the Ukrainian government.  There are a significantly smaller number of reports from an OSCE spokesperson who denied any evidence of such use.

Numerically and chronically, therefore, the scandal-reporters have it.  Denials are usually viewed as obligatory formalities, and seldom convince people.  In this case, however, the OSCE has around 100 experts permanently on the ground in eastern Ukraine.

Bloomberg reported Michael Bociurkiw, the OSCE spokesperson as saying: “We have not seen so far any evidence of cluster bombs. We have around 100 monitors, they are covering a very wide territory. If we see something, we will report it but all of our reporting is based on verified facts.”  Deutsche Welle’s apparently direct conversation with Bociurkiw varies only in details:  “We have around 90 observers in Eastern Ukraine.  If we had seen anything similar, we would have recorded it, however thus far there hasn’t’ been anything. Everything that we have to say about munitions or shelling, appears in our daily reports. Up till now there was nothing in our reports about this”

Following “a week-long investigation in eastern Ukraine”, Human Rights Watch published a report entitled Ukraine: Widespread Use of Cluster Munitions.  It begins by stating that “Ukrainian government forces used cluster munitions in populated areas in Donetsk city in early October 2014”.  “While it was not possible to conclusively determine responsibility for many of the attacks, the evidence points to Ukrainian government forces’ responsibility for several cluster munition attacks on Donetsk. An employee of the International Committee of the Red Cross (ICRC) was killed on October 2 in an attack on Donetsk that included use of cluster munition rockets.”

Should we assume that the 90-100 OSCE observers are somehow less observant or more cautious in their conclusions?  The latter would not explain why the spokesperson on Wednesday gave no hint of similar suspicions, while the mission’s work thus far has given no grounds for questioning their competence.

HRW is very well-known and so its report got a huge amount of coverage, with articles in the New York Times and numerous other media.  The following is largely based on a critical view of the HRW report by the Interpreter which unfortunately gets less readers.

The Interpreter explains that the “report, which says both sides have been implicated in the use of cluster munitions in civilian areas, focuses on their alleged use by Ukrainian armed forces, a violation of international human rights law.

HRW reports that it investigated a number of fields between positions which they say were controlled by the Ukrainian military, and also claims there is particularly strong evidence that Ukrainian government forces were responsible for several cluster munition attacks on central Donetsk in early October.   HRW certainly acknowledges that the militants may have also used cluster munitions and that it is hard to assign blame for a particular incident.  The focus of their report is nonetheless allegations regarding the Ukrainian government.  As mentioned, the OSCE has not yet reported any evidence of such use,

Throughout the entire HRW report, only once is the significant role which Russia is playing in the conflict mentioned.  More like hinted at, in fact, and without any explanation for an apparent non-sequitur. Immediately after suggesting that “while not conclusive, circumstances indicate that anti-government forces might also have been responsible for the use of cluster munitions”, “Human Rights Watch also called on Russia to make an immediate commitment to not use cluster munitions and to accede to the cluster munitions treaty.”
The Interpreter notes that “there is almost no raw data, video, pictures, or information in the report which could be independently verified”.

It is difficult to look at specific cases without seeing the videos, maps, pictures, used and being able to assess how they drew their conclusions.

The Interpreter is in no way slamming the HRW report, but it does point out concerns which are shared by others closely following events in eastern Ukraine.

The report “makes little to no effort to address the regular shelling from the Russian-backed separatists which provides the backdrop for Ukraine’s military response in Donetsk and which also kills civilians.”

The authors note that the evidence available “may suggest” that the Ukrainian government is not responsible for the vast majority of civilian deaths in Donetsk.  For this reason, and others, the lack of information about other attacks can be misleading.

The Interpreter provides evidence showing how Russian government claims that the Ukrainian military were responsible for the death of at least 10 people at a school and bus stop are almost certainly false.  They provide examples of the counter-evidence and demonstrate their point on a map.   The HRW report also omitted any mention of the shelling of the Amstor shopping centre and apartment buildings on Kuibysheva in Donetsk.  Interpreter, on the other hand, provides evidence showing why the eyewitness testimony may well be unreliable.

The authors suggest that maybe this shelling which killed 2 civilians, and injured 9 was not included in the HRW report because it had nothing to do with cluster bombs.  This is one of the three points that is of concern in the HRW report.

“Cluster munitions are not the primary weapon being used by either side, and so to focus on cluster munitions is perhaps problematic since it puts undue emphasis on one aspect of danger facing civilians.”

The second point is that the shelling is part of a military context in which one side, the Ukrainian soldiers are totally surrounded and do not have drones for targeting their weapons.  The Kremlin-backed militants have freedom of movement and drones.  “This does not excuse the Ukrainian military from its actions, but it does explain them, since the only way to defend their surrounded troops is through artillery support.”, Interpreter writes.

“The third point is that just because there is evidence, generally, that both sides are conducting this kind of shelling does not mean that a specific instance is one side or the other’s fault.”  Interpreter notes that no blame is assigned for the attack in which Laurent DuPasquier, a Red Cross worker died.

This is true in the passage quoted, however a large number of readers are likely to have read only the beginning of the HRW report.  There it is asserted that the evidence “points to Ukrainian government forces’ responsibility for several cluster munition attacks on Donetsk” and immediately goes on to mention DuPasquier’s death.  It is highly likely that most readers will have assumed that the attack in which he died was one of those they attribute to government forces.

The Interpreter makes one other point well-worth noting.  It points out that the “Russian-Backed Militants Helped Human Rights Watch Crews When Convenient”, and provides screenshots demonstrating occasions where “men who appear to be rebel fighters can be seen possibly working with the HRW team”.

It is clearly important to consider why on some occasions the militants cooperate, on others they refuse to let HRW examine an area.

The authors’ conclusion is that the HRW report “puts too much emphasis on violations by the Ukrainian government while downplaying the context -- that the Russian-backed separatists are guilty of the same crime, that Russia is militarily and economically supporting the insurgents, that the Russian-backed insurgents are the ones who broke the ceasefire and are attacking Donetsk International Airport, and that it is highly likely that none of this fighting would be happening at all if it were not Russia’s intervention in Ukraine.”

Human Rights Watch’s earlier reports also ignored Russia’s undoubted role in the conflict in eastern Ukraine, and firmly stated that the events in Donbas are an “internal conflict”.  Worth noting that in early September Amnesty International issued a report stating that the satellite images it had commissioned, “coupled with reports of Russian troops captured inside Ukraine and eyewitness accounts of Russian troops and military vehicles rolling across the border, leave no doubt that this is now an international armed conflict.”

No broader context arguments can justify the use of weapons that are rightly banned.  Here HRW, Amnesty International, all human rights groups in Ukraine and Interpreter would be unanimous in calling on the Ukrainian government to ensure a proper and credible investigation into any allegations.  There should be equal unanimity about the need for coverage and reporting of maximum objectivity and accuracy.  Given that the OSCE which has a large number of observers on the scene has not found evidence of “widespread use of cluster munitions” by any party in the conflict, response from Human Rights Watch to the concerns listed above would seem appropriate.