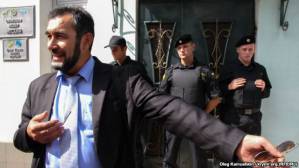 Crimean police have arrested the brother of the head of the Central Election Commission of the Qurultay, or Crimean Tatar National Congress.  Tahir Smedlyaev was arrested on Oct 22 after police stopped his car in Stary Krym.

His brother Zahir Smedlyaev reports that the arrest was clearly planned since one car first stopped Tahir Smedlyaev’s, then another turned up, and forced him, hands behinds his bank, to get in.  They also wanted to arrest his elder son, but refrained since Tahir’s 4-year-old son was also in the car.

There is still no report as to where Tahir Smedlyaev is at the moment, although the police claimed they were taking him to the Simferopol SIZO [pre-trial detention centre].

Radio Svoboda’s Crimean Service reports that last week two Crimean Tatars were arrested on charges of inflicting serious injuries to police officers carrying out their duties on May 3 this year.

The charges are of great concern considering that none were suggested at the time.  As reported, on May 2 it became clear that despite denials at high level, the Russian authorities were imposing a 5-year-ban on veteran Crimean Tatar leader Mustafa Dzhemiliev.  The Mejlis, or representative body of the Crimean Tatars cancelled planned celebration of the spring festival and called on Crimean Tatars to come to Armyansk, to the border crossing between the Kherson oblast and Crimea to greet Mustafa Dzhemiliev who came by car from Kyiv.

Around 5 thousand Crimean Tatars were met by Russian OMON riot police and Crimean ‘police’ who made it clear that they would not allow the 71-year-old world-renowned Dzhemiliev from passing through.

Mustafa Dzhemiliev consulted with other representatives of the Mejlis and decided to return to Kyiv in order to avert bloodshed.  There were protests that day, and some roads were blocked, but there were no reports of people being injured.  Given that the so-called prosecutor of the Crimean puppet regime immediately announced criminal investigations over supposed ‘extremism’, and many people also faced administrative charges, the new charges now lack any credibility.