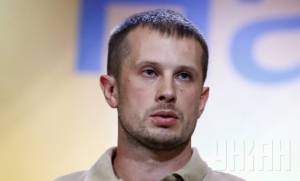 A number of candidates are likely to enter Ukraine’s new parliament after the Oct 26 elections specifically because of their role in defending the country against Russian aggression. Given the calibre of many of Ukraine’s weathered politicians, lack of political experience can actually increase a candidate’s perceived credibility and need not be a handicap.  There are however candidates whose political background makes their possible victory on a wave of support for war heroes of serious concern.

Andriy Biletsky, commander of the Azov volunteer battalion is also fighting for election in a Kyiv single mandate constituency (Obolon). He is standing without official party backing after being dropped from the candidate list of one of the main parties probably due to public expressions of concern about his neo-Nazi political views.  He is one of the two candidates, together with Valdim Stolar, an ex-Party of the Regions millionaire, viewed as front runners.

Not for his political views

It is one of the sad ironies of Ukraine’s recent history that people whose democratic values are undisputed should have effectively supported Biletsky in order to keep out a person associated with the Party of the Regions and regime of ex-president Viktor Yanukovych.  Well-known journalist Serhiy Leshchenko, for example, wrote in his blog on Ukrainska Pravda that “in order to prevent this notorious politician being elected, democratic forces should agree on and support a single candidate in district No. 217.“ He mentions that the People’s Front candidate withdrew in favour of Azov commander Andriy Biletsky.

The Azov Battalion has been involved in many successful operations, including the liberation of Mariupol at the beginning of May and the city’s defence at the end of August.   While the volunteer battalion has received publicity abroad for the neo-Nazi views of at least some percentage of its members, at home it is the Azov fighters’ courage and self-sacrifice that make an impact on people – including, of course, voters.

Biletsky has, from the outset, pitched himself as speaking for those fighting in defence of their country.  “It is not right that people who have made maximum sacrifice should not be represented in government.”  During that same interview in early September he said that he would not be waging a normal election campaign.  His, he said, would take place at checkpoints, in the trenches or even under fire from bullets and Grad missiles.

Politics is a cynical business, and it is no accident that all parties have candidates, like Colonel Yuli Manchur and pilot Nadiya Savchenko, widely known and admired for their bravery and service to Ukraine since Russian troops first took control in the Crimea.  The calculation that these candidates will have wide support from the voters is probably correct.

Biletsky is nominally standing as an independent but it is likely that those committed democrats who called on other candidates to stand aside, assumed that as commander of a volunteer battalion, he was their best bet to win against a representative of the old order.  His views were presumably seen as secondary.

The danger is enormous.  Biletsky has downplayed his neo-Nazi ideology, but is in no way renouncing it.

Biletsky has been head of the far-right organization ‘Patriot of Ukraine’ since 2006.  According to Viacheslav Likhachev, researcher of xenophobia in Ukraine and far-right movements,  the organization is neo-Nazi. It emerged after certain radical members of the Social-National Party rejected the more moderate school which soon rejected neo-Nazi symbols and formed VO Svoboda. Biletsky’s ‘Patriot’ organization, Likhachev says, “propagates anti-liberal and racist views”.  He points out that Biletsky was previously involved in criminal activities as well as probably providing political technology services for members of the former ruling Party of the Regions.

One particularly unsavoury period was in the 2000s when Biletsky was closely involved with the Ukrainian Conservative Party.  That, in turn, was linked with MAUP, the Inter-Regional Academy of Personnel Management which during those years earned Ukraine notoriety for its aggressively anti-Semitic propaganda. Ironically, MAUP, which disappeared off the scene around 2008, had strong ties with the Moscow Patriarchate which effectively approved its anti-Semitic activities.

In 2008 ‘Patriot of Ukraine’ initiated the creation of the Social National Assembly which Biletsky still heads. On Oct 18, under Biletsky that organization worked together with notorious provocateur Dmytro Korchynsky and his Bratstvo party in causing disturbances outside the SBU [Security Service] building.

On Dec 1, 2013 outside the president’s administration on Bankova St, young men with SNA symbols were involved, again together with Korchynsky’s Bratstvo, in provoking the disturbances which the Yanukovych regime used to justify the use of force against the EuroMaidan protesters and to try to present the movement as violent and dangerous.

In keeping with the image Biletsky is cultivating, his ‘programme’ is ultimately succinct: “A strong nation! Honest government! A powerful state!”  He says that his aim in parliament would be to ensure ultimate victory in the war “from the rear, from the Verkhovna Rada”.

Biletsky says that the “right-wing movement in Ukraine is fairly monolithic now with all internal contradictions having faded into the background when we gained the opportunity to defend our country.  I recently heard the phrase from young guys that we are ourselves the government, at least, military, and our cause is now constructive, not destructive. ”

Biletsky hopes that this can be expanded with the creation of “a mass youth movement based on a healthy lifestyle in all sense of the term”.  “This will be all-embracing from patriotic education to a huge number of various sections, sports and not only, historical, military-historical clubs.”

All of this is very close to the far-right movement which Biletsky headed in peacetime. That same organization was violently racist and anti-migrant, and espoused ideas based on race and ‘great-nationhood’.

Asked about these views, Biletsky says that they have taken secondary position because of the war. He does not renounce them.

Yanukovych and his cronies fled the country on Feb 22.  There was time only to gain a glimpse of how those who had plundered Ukraine lived before Russia began its undeclared war against Ukraine.  It is not surprising that for many the imperative that the old regime should not return to power overrides all other considerations, nor that those who are defending Ukraine are viewed as the best alternative.  Let’s hope that many are, but once elected, MPs with a repugnant, intolerant and profoundly undemocratic platform will not always treat their far-right philosophy as “secondary”.  Some candidates are a very dangerous alternative.