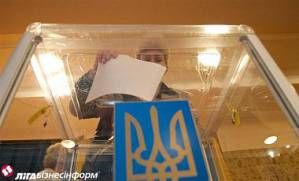 Voting is underway in Ukraine and against all odds appears to be going reasonably well.  Small but welcome indicators are that the websites of the 2 main election watchdogs - OPORA and Committee of Voters of Ukraine [CVU] –  have not been subjected to DDoS attacks and the police are themselves reporting electoral irregularities, not implicated in them as they were in 2012.   comes from the Rivne branch of CVU who were informed by voters in Dubno of an attempt to organize ‘carousel’ voting.  Those trying to rig the results by taking clean ballot papers from the polling station were driven off by the voters themselves.  CVU reports that the vote-riggers were offering 100 USD [a large amount of money for most people in the area].

As reported, voting will not be taking place in the Crimea and Sevastopol which are under Russian occupation and in 15 electoral districts in Donbas (mainly in the Donetsk oblast).  CVU reported earlier this week that as many as 45% of the electorate in the Donetsk oblast would probably be unable to vote.  There have also been reports of overt attempts to frighten voters in other districts directly adjoining areas under the control of the Kremlin-backed militants of the self-proclaimed Luhansk People’s Republic.

As of midday, there was 20 % turnout.  By 15.00 Kyiv time, OPORA 628 electoral infringements. Since their site was down two years ago, a direct comparison is impossible, however it seems likely that an honest evaluation then would have reported a figure very many times higher.

A cheering aspect of the 2014 October elections is that some of the infringements below have been reported by the police.  During previous elections, the police were often deployed to rig the outcome.

that the bomb alerts that resulted in 6 polling stations in Mykolaiv being evacuated with sniffer dogs checked out the premises all proved fake.  In one polling station, however, - No. 480911 – all observers left the premises, however three people remained. By the time a mobile group arrived, one ballet box had been half-filled.

CVU notes – and has doubtless informed the police – that the bomb alerts were used for voting infringements.

The Kherson regional branch of CVU widespread infringements in the Kherson oblast.  It mentions candidates campaigning in public transport; a delay in opening in one polling station (650462) because the head of the precinct election commission [PEC] had lost the keys to the safe and had to break into the safe using an axe.  There were also problems with the wrong number of ballot boxes.   The main problem appears to have been with spoilt ballot papers, though again the numbers do not appear to be high.

The that they stopped an alleged attempt at ‘carousel voting’.  It is not clear whether the voters were supposed to ‘vote’ more than once, but they were certainly offer a significant amount of money for their services.  A criminal investigation is now underway under the article of the criminal code on vote-buying.  As reported, the penalties for this were recently increased significantly.  The police report says that the relevant police department was alerted to the situation by messages on social networks recruiting people, the report claims, for attempts to rig and disrupt the elections.

Journalist Ihor Petrovsky that  in No. 27 election district in Dnipropetrovsk, there were at least three cases where people were caught photographing ballot papers while in the booth.  Protocols were drawn up since this is a direct infringement of electoral legislation (and may indicate vote-selling).

In the 20 minutes or so, it took to report the above, OPORA has added 10 more electoral infringements.

It could doubtless be better, but it has been very much worse.

Some of the problems arose because parliament did not change the election legislation.  It was Viktor Yanukovych, when president, who insisted on returning to a 50-50 system where half the MPs stand in single mandate constituencies.  This was one of the major factors in the total corruption around the 2012 elections.  It is probably no accident that the main problem which election monitors have reported before these elections is fairly wide-scale vote-buying, other open or covert.