Ukrainian voters drive off ‘carousel’ vote-riggers45% in Donetsk oblast will not voteThousands of soldiers prevented from votingSurreal battle of old and new members at Donetsk electoral commissionCVU: serious concerns over at least 2 single mandate constituenciesSignificant number of ‘new’ MPs voted in Jan 16 dictatorial lawsDead souls and infants ‘voted’ in Russia’s sham ‘referendums’ on annexing Ukrainian territory‘Vote to join Russia’ or armed soldiers will come for youLook at this instead. Anti-war activities in Russia, 2-11 September 2022Invaders stage fake referendum so they can accuse Ukraine of ‘invading Russia’ Feminists, “Railroad Partisans” and School-Leavers Protest. A Digest of Protests in Russia, 25 June-2 July 2022 “We’re not celebrating today” – digest of Russian protests (early June 2022)Russia is forcibly ‘mobilizing’ Ukrainians from occupied territory to fight its war against Ukraine Fake ‘referendums’ at gunpoint planned to try to ‘legitimize’ Russia"s invasion of Ukraine Putin ramps up aggression against Ukraine through so-called ‘Russian citizens’ in occupied Donbas Putin’s new law envisages annexing other countries" territory as grounds for Russian citizenshipNew United Russia party MP confirms that the fighting in Donbas is by “Russian forces”’ Neo-Nazi Russian nationalist exposes how Russia’s leaders sent them to Ukraine to kill UkrainiansEx-Donbas militant leader who wants Russia to seize most of Ukraine elected to Russian parliament Ruling party in Russia openly admits plan to annex Donbas
• Topics / Elections 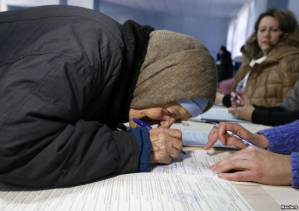 Observers from OPORA and the Committee of Voters of Ukraine [CVU] reported in the early hours of Oct 27 that artillery fire near District Election Commission No. 60 in Volnovakha [Donetsk oblast] had forced members of the commission to suspend work.

This was the first report of shelling since voting began on Sunday, however the conflict took its toll on the elections in the Donetsk oblast with only around 42% able to vote in the parliamentary elections.  The others are on territory under the control of Kremlin-backed militants.  Radio Svoboda that four Donetsk oblast residents who tried to vote at the school which had housed their polling station during previous elections were even shot at by the militants.

There were far less reports of intimidation, however, than before and during the presidential elections on May 25.  Then the militants went all out to disrupt the elections, attacking election commissions, sometimes abducting their heads.

There were also a number of reports from CVU and OPORA of reasonably overt attempts to rig the elections.

, for example, that members of a precinct election commission (No. 140089; district No. 59) had earlier refused to count the ballot papers in the presence of observers.  They later opened the boxes and began the count however in full view of an observer, one of the PEC members put ballot papers into the box while it was being opened.