Savchenko: Abducted, then charged with ‘illegally crossing the border’ 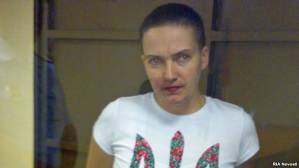 Russia’s Investigative Committee is planning to charge Nadiya Savchenko, the Ukrainian pilot captured by Kremlin-backed militants and then taken by force to Russia, with illegally crossing the border.

Her lawyer, Mark Feygin has tweeted the relevant Investigative Committee document which concludes that if Savchenko “was not abducted, the investigators believe, this means that she illegally crossed the border.  This comes under Article 322 of the RF criminal code”.

As reported here, Russia tried a similar ploy after abducting left-wing activist Leonid Razvozzhaev from the centre of Kyiv on Oct 17, 2012.   Razvozzhaev had popped outside to get something to eat while completing his application for asylum with the UN Human Rights Commission for Refugees (a Kyiv partner of the UNHCR).  His cries for help were heard from the office, and he was seen being forced into a car.  Two days later, a Moscow court remanded him in custody for 2 months, with this later extended.  There had been no extradition request and Razvozzaev was in Ukraine legally.  He was also, effectively, an asylum seeker and therefore under international protection.  The authorities in Russia claimed that Razvozzhaev had “handed himself in” and “confessed” to organization of mass riots as per an anti-opposition film on the pro-Kremlin NTV channel. Razvozzhaev was able from the courtroom to shout that he had been tortured into ‘confessing’.   He was later also charged with illegally crossing the border.  With all the evidence against this version of events, a Russian court in July this year convicted him (together with Sergey Udaltsov) of organizing mass disturbances and, in Razvozzhaev’s case, of illegally crossing the border.

The charges against Nadiya Savchenko are especially grotesque since a video was released by the Kremlin-backed militants who took her prisoner in the Luhansk oblast on June 20 this year.  She was remanded in custody by a Russian court on July 3.  Even without Savchenko’s own testimony that she was taken across the border bound and with a bag over her head, it seriously strains credulity to believe that between June 20 and July 3, the militants released her after which she made her own way – illegally! – to Russia in order to then be arrested and face charges which appear to be based solely on the militants’ claims.

The Moscow Basmanny Court which under the rule of Vladimir Putin has become notorious for rubber stamping politically motivated rulings extended Nadiya Savchenko’s detention by four and a half months, to Feb 13.  More detail can be found at: