Kharkiv’s authorities find themselves in no need of lustration 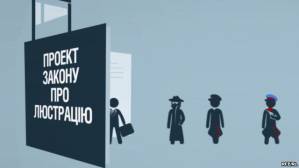 The Kharkiv City Council that it carried out a ‘check of personnel’ in according with the and found nobody who fell under the force of the law.

The task of checking was carried out by Tetyana Chechetov-Terashvili, daughter of a somewhat notorious Party of the Regions MP (at least in the previous parliament) Mykhailo Chechetov.   She was been deputy mayor since March 2014, and in charge of the Council’s Executive Committee.

The Kharkiv regional administration is reported by Channel 5 to have also stated recently that their personnel do not fall under the bill.

This arouses some degree of scepticism since the bill covers a fairly broad range of employees.  Among the reasons why the law has come in for criticism are both the wide range of posts and individuals who are deemed to deserve lustration because of the posts they held, and the fact that it is the heads of their departments who are assigned the task of deciding who falls under it.

See also: A Lustration Law for the Record – and the Elections and the texts below it.