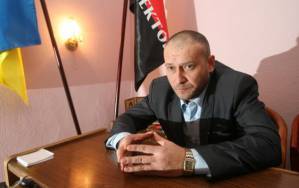 Russian media response to the galling failure by Ukrainian voters to provide any indication of a descent into ‘fascism’ was predictable.  The pitiful showing by the constantly demonized Right Sector (1.81%) and far-right VO Svoboda party (around 4.73% with over 95% of the votes counted) was largely ignored, while individual successes were over-emphasised.  Meanwhile various articles in RIA Novosti and pro-Russian sources suggest that no major readjustment of the ‘fascist’ narrative is planned.

Anton Shekhovtsov, researcher into radical movements expects Ukraine’s newly elected parliament to have around 13 MPs with views which can be considered far-right.  All but 3 were standing in single-mandate constituencies.  This means that had parliamentarians changed the 50-50 system foisted on Ukraine by former president Viktor Yanukovych back in 2012 almost no far-right candidates would have been successful.  Since the 50-50 system was condemned by Ukrainian and international organizations specifically because it distorts the electoral will of the voters and encourages manipulation and corruption, it is a frustrating indication of all political parties venality that they made no effort to discard an obviously faulty system.

Andriy Biletsky, commander of the “Azov” volunteer battalion and leader of the far-right ‘Patriot of Ukraine’ organization won in the Obolon district of Kyiv.  As reported, a number of people with undoubted democratic and liberal credentials supported Biletsky against Vadim Stolar, a millionaire closely associated with the previous regime.

Dmytro Yarosh, leader of Right Sector and Boryslav Bereza from the same party have won their seats, as did Andriy Denysenko from Dnipropetrovsk.  The latter dissociated himself from Right Sector in March, and, according to Shekhovtsov, was supported in the elections by the Petro Poroshenko Bloc.

This leaves three people on the Radical Party’s candidate list.  Yury Shukhevych (No. 5 on the list) is the elderly son of the war-time leader of the Ukrainian Insurgent Army [UPA].  Ninth on the list and therefore also sure of a seat is Ihor Mosiychuk.  He was at one stage deputy commander of ‘Azov’ and has pronounced neo-Nazi views.  Dmytro Linko, a member of notorious provocateur Dmytro Korchynsky’s  Bratstvo is No. 20 on the list,

It is noteworthy that Shekhovtsov identifies only those three candidates as having far-right views in Lyashko’s “dangerously populist and anti-establishment” Radical Party  which has gained around 7.4% of the votes.  He also stresses that the Right Sector party is less radical than the movement which came to the fore during EuroMaidan and proposes the term ‘national conservative’.

Viacheslav Likhachev who has long monitored anti-Semitism and xenophobia in Ukraine points out that in numerical terms, far-right gains in parliament are around a third of those achieved in 2012.    How much many of the individuals fall under that category can also be questioned.  Bereza, for example, has never made any statements of a far-right nature, and his election, like that of many others is probably linked with his role as a volunteer in Russia’s undeclared war against Ukraine.

There were few shocks in these results, since the low support for Right Sector in particular, but also VO Svoboda, had been reflected in public opinion polls for some time.  Such inconvenient facts were ignored by the Russian propaganda machine before, and all signs are that this will continue.  There has been a surge of articles about Ukraine’s supposed ‘descent into fascism’ which the West is allegedly turning a blind eye to over the last two days.  Preference is clearly given to ‘western sources’ for such alarming news/  RIA Novosti, for example, quotes “American writer Russ Bellant” who also considers that the USA is to blame for the rise of “neo-Nazism” in Ukraine.   The World Socialist Website also points an accusatory finger at the west in its article US, EU hail election staged by ultra-right regime in Ukraine.

The main thrust of Russia’s propaganda has remained Right Sector, with the attempts used to present them as source of rampant fascism and anti-Semitism often going comically wrong.  Earlier in October, claims in the Russian newspaper Izvestia that “Right Sector had declared war on Jews in Odessa” were immediately refuted by the Odessa Jewish Community with the suggestion clear that the whole exercise was viewed as dangerous provocation.

Back in May, the attempt by a Russian channel to misrepresent the results of the presidential elections and suggest a win for Right Sector candidate Dmytro Yarosh caused mirth, no more.  With the Russian enforcement bodies and courts all following the same line and at least seven people now detained on ‘Right Sector plot’ charges, there is nothing humorous about this reversion to the worst period of Soviet repression when any charges, however grotesque, would do.  It is probably significant that the claim that world-renowned film director Oleg Sentsov and three other Crimean opponents of Russia’s annexation were members of a ‘Right Sector plot’ came 5 days after the presidential elections first gave the lie to the Russian narrative about a far-right ‘junta’.

Over the last 2 weeks, three Crimean Tatar activists, including Tahir Smedlyaev, brother of the head of the Central Election Commission of the Qurultay, or Crimean Tatar National Congress, have been arrested in the Crimea.  The charges against all three appear to be a surreal mixture of charges laid now 6 months after the peaceful protest on May 3 over the ban on Mustafa Dzhemiliev entering his homeland and claims of ‘Right Sector involvement’ and ‘extremism.

The danger of any country “descending into fascism” should never be minimized.  however Ukraine’s parliamentary elections last week do not appear to indicate any fatal malaise.  The same cannot be said of Russia’s Right Sector fever.