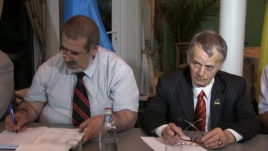 Members of the Crimean Tatar Mejlis, or representative-executive assembly have expressed disillusionment over the failure by Ukrainian political parties to ensure that Crimean Tatars are represented in the new Ukrainian parliament.

Artem Chyyhoz, deputy head of the Mejlis is not alone in feeling frustration that the head of the Mejlis, Refat Chubarov was not given a place on the candidate list of the Petro Poroshenko Bloc which would have ensured him a seat in parliament.  Instead he was 71st on the list, meaning that the only member of the Mejlis to enter parliament, and possibly the only Crimean Tatar in the Verkhovna Rada will be veteran Crimean Tatar leader Mustafa Dzhemiliev (No. 5 on the same list).

Ali Khamzin, head of the international liaison section of the Mejlis, told Radio Svoboda’s Crimean Service that the assurances given by representatives of the new government had proven empty.  He says that Yury Lutsenko, as head of the Poroshenko Block had stated that all Euromaidan parties would include a Crimean Tatar in positions close enough to the front of the candidate list to enable their election.  He believes that if they had been serious about this, they would have ensured that Chubarov was elected.

There do not appear to be any representatives in the other parties voted in at the Oct 26 elections.

The frustration expressed is more than understandable.  Crimean Tatars have been especially badly affected by Russia’s annexation of the Crimea, and have experienced a frightened wave of repression over the last 6 months.  As reported, both Mustafa Dzhemiliev and Refat Chubarov have been banished from their homeland, while Dzhemiliev’s son, Khaiser, is being held in a Russian detention centre inside Russia.  Crimean Tatars have faced armed searches of their homes, mosques and religious schools and there has been a concentrated attack on the Mejlis, presumably for its opposition to Russia’s occupation of the Crimea.  There have also been a number of disappearances and abductions.

Ukraine’s leaders have not in general done enough to support people in the Crimea and the many who have fled to mainland Ukraine because of the annexation.  Proper representation in Ukraine’s Verkhovna Rada would not be enough, but lack of such representation makes their chances of getting their needs heeded even lower.