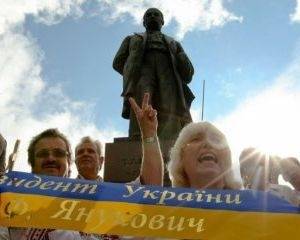 In 2011 65-year-old Halyna Shvydka was jailed for 10 days after she cut the then president Viktor Yanukovych’s name off a wreath to the poet Taras Shevchenko.   On Oct 30, 2014 the European Court of Human Rights found unanimously that Ms Shvydka’s right to freedom of expression and right of appeal in criminal matters had been violated.  It ordered the Ukrainian Government to pay Ms Shvydka 5 thousand EUR in compensation.

The application was made to the ECHR in October 2011 after the Kyiv Court of Appeal upheld the ruling of the Shevchenkivsky District Court in Kyiv.  The latter had sentenced the 65-year-old pensioner to 10 days imprisonment for “spoiling the President’s personal property”.  The said “personal property” was a wreath placed at a monument to the Ukrainian poet Taras Shevchenko.   The court also found Ms Shvydka’s action to have demonstrated “flagrant, cynical contempt for society and morality”.

Halyna Shvydka insisted that her action was a conscious protest against the policies of Viktor Yanukovych and the actions of the law enforcement bodies and that the punishment of 10 days imprisonment violated her freedom to express herself and constituted political persecution.

The following is from the ECHR press release:  Ten days’ detention for an act of political protest against Ukrainian President Yanukovych was excessive

In its Chamber judgment in the case of Shvydka v. Ukraine (application no. 17888/12) the European Court of Human Rights held, unanimously, that there had been:

The case concerned the detention for ten days of a member of a Ukrainian opposition party for tearing a ribbon from a wreath which had been laid by the then President of Ukraine, V. Yanukovych, during a ceremony. Ms Shvydka, the applicant, was arrested and convicted of petty hooliganism and sentenced to ten days’ administrative detention. She appealed against that conviction on the first day of her detention but the appeal was not heard for a further three weeks.

The Court noted that the removal of the ribbon from the wreath was an act of political protest protected by Article 10 of the Convention. It found, in particular, that the punishment for Ms Shvydka’s refusal to change her political views and accept that her actions had been wrong was disproportionate. Additionally, Ms Shvydka’s appeal, which was only heard after she had served her sentence in full, had not provided adequate protection against any shortcomings in the first-instance proceedings.

The applicant, Galyna Mykolayivna Shvydka, is a Ukrainian national who was born in 1948 and lives in Kyiv (Ukraine).

On 24 August 2011 Ms Shvydka, a member of Batkivshchyna, an opposition political party (whose leader, Yuliya Tymoshenko, was then in prison), took part in a ceremony on the occasion of the country’s Independence Day. The then President of Ukraine, V. Yanukovych, attended the ceremony and laid a wreath. After the ceremony Ms Shvydka carefully detached from the wreath part of the ribbon bearing the words "the President of Ukraine V.F. Yanukovych" in order to express her disagreement with his policies. That act was witnessed by a large number of bystanders.

Ms Shvydka was subsequently found guilty of petty hooliganism and sentenced to ten days’ administrative detention on 30 August 2011. She appealed against her conviction and sentence on the first day of her detention on the grounds that she had been expressing her opinion and that she had not intended to cause a disturbance to the public order when removing the ribbon. Three weeks later, on 21 September 2011, the appeal court upheld the first-instance decision. By that time the applicant had served her sentence in full.

Complaints, procedure and composition of the Court

Relying on Article 10 (freedom of expression), Ms Shvydka complained about her conviction of petty hooliganism for expressing her disagreement with Mr Yanukovych’s policies and his Presidency of Ukraine, alleging that her detention for ten days was excessive.

Also relying on Article 2 of Protocol No.7 (right of appeal in criminal matters), she complained that the examination of her appeal had only taken place after she had already served her sentence in full.

Decision of the Court Article 10 (freedom of expression)

The Court decided that Ms Shvydka removing the ribbon, and the context in which that act had occurred, sought to convey ideas of a political nature about the President to those around her and could be considered a form of political expression worthy of protection under the Convention.

Ms Shvydka’s conviction of petty hooliganism had been lawful and pursued the legitimate aim of protecting public order and the rights of others. However, the Court found that sentencing Ms Shvydka, a 63-year-old woman who did not have a criminal record, to ten days’ imprisonment, the harshest sanction available for a wrongdoing that did not involve any violence or danger, was disproportionate to that aim. Indeed, her refusal to admit her guilt for that offence was referred to during sentencing, thus effectively penalising her for refusing to change her political views.

The Court therefore concluded that Ms Shvydka’s right to freedom of expression had been violated, in breach of Article 10 of the Convention.

Article 2 of Protocol No. 7 (right of appeal in criminal matters)

Ms Shvydka’s appeal to the Kyiv City Court of Appeal was not heard for three weeks after her sentencing. In national law, where a minor offence, such as that committed by Ms Shvydka, was sanctioned by a term of administrative detention, an appeal had no suspensive effect.

The Court held that the right to have one’s sentence or conviction reviewed by a higher tribunal would be breached where that review took place after the sentence imposed by a court had been served in full. It emphasised that an appellate review was not capable of remedying the defects of the lower court’s decision at that stage. In Ms Shvydka’s case, the Court found that the length of the delay in examining her appeal relative to the length of the sentence had impaired the appeal of 21 September 2011, which was therefore not capable of curing any defects in the first-instance court’s decision. It followed that there had been a violation of Article 2 of Protocol No. 7 of the Convention.

The Court held that Ukraine was to pay Ms Shvydka 5, 000 euros (EUR) in respect of non-pecuniary damage.