Russia’s New Odessa FileOdesa "Massacre" Propaganda vs. the FactsDangerous silence over police role in Odessa May 2 eventsWithout Double StandardsWhat Russian TV won’t show about the events in OdessaCVU: Pro-Russian activists sold information about pro-Ukrainian activists in OdessaUHHRU condemns police role in Odessa tragedyRussia is waging a bloody war against Ukrainian childrenRussia kills at least 240 Ukrainian children, forcibly deports thousands of others ‘I saw fire arrows flying from Kherson...’‘... I sang in the basement to calm my daughter down’A brief description of the KHPG strategic litigations in the first half of 2021On the situation in prison colonies №77, №100, №25. Following the visit of the European Committee for the Prevention of Torture and Inhuman or Degrading Treatment or Punishment (CPT) from 4 to 13 August 2020 Russia’s Lie Machine Fans Flames of Odesa ‘Massacre’Application practice of Article 110 of the Criminal Code of UkraineA brief description of the KHPG strategic litigations in July–December 2020Main suspect in Odesa 2 May 2014 tragedy given high-ranking post in Russian-occupied CrimeaA brief description of the KHPG strategic litigations in January – June 2020Statement of Kharkiv Human Rights Protection Group and ADC MemorialRussia’s most toxic ‘Odesa Massacre’ lie and the help Ukraine is giving it
• Topics / The right to life 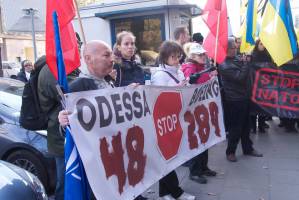 Protest outside Ukraine’s embassy in Warsaw, Nov 3.  The banner does not withstand critical analysis, especially mention of the victims of the Malaysian airliner almost certainly downed by Kremlin-backed militants in Donbas

Small demonstrations took place around the world on Nov 2 supposedly in memory of victims of a ‘massacre’ that never took place.  All the gatherings were broadly similar with flowers and candles for the victims merging with slogans against NATO and US intervention in Ukraine.

While those demonstrations, and the constant refrain from Russia, all speak of the need for a proper investigation, neither Moscow nor pro-Kremlin media ever present the events as other than a massacre.  Russia’s state-run RIA Novosti, for example, asserts that clashes earlier in the day simply ‘broke out” and claims that “Pro-Kiev radicals and Right Sector militia blocked the anti-government protesters in the House of Trade Unions and set the building on fire, using Molotov cocktails”.  This line is followed by all pro-Kremlin Russian media, by the Russian Investigative Committee and constantly repeated by Russian officials.  It is the refrain not only of the above-mentioned ‘demonstrations’, but also of a travelling exhibition, numerous websites and ‘reports’ on alleged human rights crimes by the Ukrainian authorities.

A number of young men who came to fight on the side of Kremlin-backed militants, as well as relatives of some who died fighting, have reported that the ‘Odessa Massacre’ was ‘the final straw for them’.

The following is a brief summary of the key discrepancies in the ‘Odessa Massacre’ narrative, with links to more detailed examination of the evidence.

The earlier violence in the centre of Odessa

A chronological account of the events is provided in the June report from the UN Human Rights Monitoring Mission in Ukraine (HRMMU).   This makes it clear that a small group of pro-federalism activists initially provoked the violence in the afternoon, that the first person killed was a pro-Ukrainian unity  activist and that weapons were used by both sides.

The role of the police

This is largely ignored by the Russian ‘massacre’ lobby but pivotal to all investigations.  In the above-mentioned report, HRMMU also raises questions about the role of the police, and expresses frustration at the lack of cooperation from the police and SBU [Security Service].  Nor are they alone in this.  The May 2 Group, made up of journalists, civic activists, and others, have also publicly demanded answers regarding the role of the police in general, and specific officials in particular.

Fuchedzhy disappeared after the tragedy and was placed on the wanted list.  He has since been interviewed on Russian television claiming that the events were planned in advance and by people high up to get rid of the pro-federalism protesters.

A majority in the May 2 Group have recently published a report in which they suggest that an agreement had been reached between the police, the pro-federalism activists  who had set up a camp on Kulikovo Pole and the pro-unity activists.  They explain that the camp had long turned into a problem for the pro-federalism activists themselves, but that they did not want to lose face by simply packing up and going home.  The police however needed them removed before planned Victory Day events on May 9.  Pro-unity football fans were supposed to dismantle the anti-federalism tent camp, with the police ensuring that all passed without any major trouble or use of force.   All interests were taken into account, with the Group’s information suggesting that a particular politician Gennady Trukhanov was prepared to finance the peace process, presumably including the amount of money which the pro-federalism activists were to receive.  According to this version, Fuchedzhy and the regional police management were responsible for ensuring the technical side of things.

The Group report that one of the groups on Kulikovo Pole – the Odessa Druzhyna - agreed to the plan and the money offered, however a few days before the events, calls began appearing in social networks asking people to gather at 13.30 for a counter-rally against the planned march and rally in support of Ukrainian unity which were labelled “a march of fascists”.

These calls were not supported by the leaders of the Odessa Druzhyna and of other protests, but they were heeded by a number of young men, mostly in masks who were responsible for the initial raid on Maidan.

If the members of the Group are right, then the prior arrangements would explain a number of oddities.  These include the schism among the pro-federalism activists and the fact that at the beginning nobody even tried to defend the tents on Kulikovo Pole.  Most importantly, they might go some way to explaining baffling behaviour by the police who did not implement the crowd control action plan code-named “Wave”, and did not ensure reinforcements as a crowd of angry activists headed towards Kulikovo Pole.  The police were also under-represented and largely inert during the trouble there.  HRMMU was told that they had been awaiting orders.  If, however, they had already received orders to keep a low profile as the tents were removed, they might easily not have understood that events had gone far beyond those original arrangements.

Why there were so many deaths

The authorities’ failure to cooperate is especially frustrating as it enables wild distortion of the real causes of the disaster and gives apparent credence to claims that the authorities are concealing the real number of victims.

6 people died of gunshot wounds during the original conflict, with the first two pro-unity activists.  42 people died in the fire or as a result of injuries  sustained in jumping from the burning building.

They died because the fire engines took over 40 minutes to arrive, despite being just around the corner.  HRMMU were told that this was because the police did not create a safe and secure perimeter to allow the fire engines to get to the building. There is in fact no evidence that the fire brigade even tried to turn up although called numerous times from 19.30. People ringing were told that only the tents were burning, and that there was no danger to life.

The ‘massacre’ lobbyists push certain claims that are at variance with the facts.

Although it is most likely the case that the entrance to the building went up in flames because of pro-unity activists throwing Molotov cocktails, according to Vladislav Balinsky from the May 2 Group, the evidence indicates that some of the pro-federalism activists had prepared well in advance to barricade themselves in and defend the Trade Union building. They had also tricked around 380 people – both supporters and tram passengers – into coming into the building.

There was undoubtedly irresponsible behaviour, sometimes much worse.  Some ultras [football fans] and other pro-unity activists stormed the building from the left wing entrance brandishing shock pistols and similar.  This resulted in some of the people inside fleeing to parts of the building which were later blocked by the flames.

One member of a EuroMaidan ‘self-defence’ unit [sotnya] named only as Mykola can be seen shooting at windows with a shock pistol.

The claims that the ‘radicals’ killed those who managed to escape the fire is not borne out by the video footage, nor by witnesses, such as Serhiy Dibrov, coordinator of the May 3 Group, and himself streaming footage of the events for some 7 hours.

The Group has so far established only one case where a person injured after jumping was attacked by a man who in a few seconds dealt the injured man two or three blows.

There were also cases, Dibrov reports, of rough treatment of people who managed to get out of the building themselves.  He is not aware of any case involving life-threatening violence.

No conspiracy of silence

Russian propaganda has from the outset claimed that larger numbers died and that the Ukrainian authorities are  concealing what is presented as deliberate murder.  As Russia’s rhetoric has become more aggressive, there are increasing accusations against the West of ‘covering up’ a supposed monstrous crime.

Such unsubstantiated claims are used in warmongering and have probably already duped some young Russians into coming to Ukraine to fight.   The last 6 months have made it abundantly clear that the truth will not be deemed an impediment by those determined to push a false narrative.  Nonetheless failure by the Ukrainian authorities to ensure open and unflinching investigation into all aspects of the events on May 2 undoubtedly make it harder to counter the cynical and immensely dangerous ‘massacre’ lies.

More detail about the events on May 3 can be found at:

and  Dangerous silence over police role in Odessa May 2 events