Kremlin plays ‘extremist’ card against ’Memorial’ rights organizationRussia: new offensive brewing against NGOsRussian NGO branded as “foreign agent” after reporting on Russian military action in UkraineRussian NGO has list of 400 killed or wounded Russian soldiersIf Russia is not at war, then who is in those freshly-dug graves?Macabre Convoy: Cargo 200 from Ukraine to RussiaInvasion by any other nameHalf-empty or half-emptied?Poland knows about Russian ‘humanitarian convoys’. It didn’t let one in.Stand up to Putin: buy Polish apples!No Sanctions Game Changer?Will the West sleep through this final wake-up call?Russian LifeNews inadvertently told the truth about downed Malaysian airlineMilitants accused of deliberately shooting at Severodonetsk residential areaSent to be shotThe EU’s Opaque Dealings with UkraineWhose anti-Semitic and Homophobic Choice?What should they talk about, Mr Putin?The Peace that chokes RussiaEU’s Clear and Consistent Capitulation?
• Topics / Politics and human rights 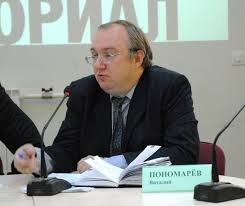 Vitaly Ponomarev, board member of the renowned Memorial Human Rights Centre, was prevented from entering Ukraine on Tuesday and sent back to Moscow.  No reason was given for this baffling and clearly unlawful ban

On Nov 4, 2014 Ukrainian border guards prevented a board member of the Memorial Human Rights Centre from entering Ukraine.  Vitaly Ponomarev was informed on his arrival in Lviv that he was banned entry, and was sent back to Moscow two hours later.

The document drawn up by border guard official Olena Vishnyakova states only that the ban is based on the ‘decision of an authorized state body’.  The border guards refused to inform Ponomarev when and by whom the ban had been imposed and for how long.

Vitaly Ponomarev had arrived in Lviv to take part in a court hearing on Nov 6 regarding two asylum-seekers.

“In more than 20 years of work in journalism and human rights defence I have on several occasions come up against bans because of my professional work.  The bans were imposed by dictatorial regimes in Central Asia. It is regrettable that an analogous problem has now emerged in Ukraine.  The border guard officials who found my name in their database did not themselves know the reason for the ban.  They asked if I might have faced administrative charges. My answer is categorical: I have never infringed any laws in this country”.

The Memorial Human Rights Centre points out that any ban on entry to a country because of human rights activities is in breach of Ukraine’s international obligations.

It calls on the Ukrainian authorities to provide full information about the incident and to reconsider a clearly unlawful decision.