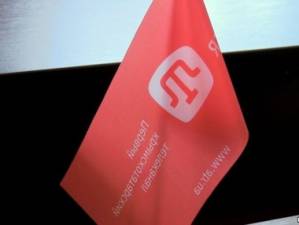 Ukraine’s National TV and Radio Broadcasting Council has called on providers to consider including the Crimean Tatar TV channel ATR which has come under serious pressure from the occupation regime in the Crimea.  The Council points out that as a result of Russia’s annexation of the Crimea, people in mainland Ukraine do not have the possibility to receive full information at first hand about what is happening in the Crimea.  It suggests that by broadcasting ATR, the providers will be uniting efforts to counter the psychological and propaganda influence from Russia and ensurng that people receive more truthful and varied information about the state of affairs in the Crimea.

The Council has sent out letters to providers and reports that as of Nov 4, one business ‘ Zhalubak’ – was already broadcasting ATR on its network.

The first and only Crimean Tatar television channel ATR has, together with other independent media, has come under serious pressure from the occupation regime.  The latter has shown a disturbing willingness to accuse Crimean Tatar channels and newspapers of ‘extremism’ for any statements or reports about opposition to Russia’s annexation of the Crimea.

As reported, on Sept 24 the channel received a letter from the Centre for Countering Extremism.  This claimed that ATR “‘is persistently fostering the idea of possible repression on ethnic or religious grounds, is fostering the formation of anti-Russian public opinion and is deliberately stirring up distrust of the authorities and their actions among Crimean Tatars, with this indirectly creating the threat of extremist activities.”   The channel was ordered to provide all official documents and a list of all official members of staff.

There have since been ominous statements from high-ranking politicians, such as the deputy speaker in the Crimean parliament Alexander Formanchuk.  He accused ATR of a conscious anti-Russian information policy and of pushing the view that the Crimea had joined Russia against the will of the Crimean Tatar people. He claimed that all the ATR news is based on undermining the authority of the Crimean leadership, local and central authorities.

“It’s time to make it clear that the Russian state does not tolerate the lawlessness of supposed freedom typical for Ukraine. In mainland Russia such actions are immediately stopped. I hope that this will be done and that the law enforcement structures will have something to say”.

In July two Crimean Tatar newspapers – ‘Avdet’ and ‘Kyyrym’ – were told that they had been ‘denounced’ for allegedly ‘circulating extremist material’.  Chief Editor of Avdet, Shevket Kaibullaev reports that he received a summons to the FSB [Russian Security Service] on July 24 over a supposed complaint by a member of the public to Roskomnadzor, Russia’s effective censor.  The letter claimed that the papers were publishing calls to extremist activity.  It cited material from Avdet regarding the decision by the Mejlis or representative body of the Crimean Tatar People to boycott the coming elections to the Crimean parliament.  This was viewed as ‘extremist’ and Kaibullaev was asked to give his explanation.  No warning was issued on that occasion, however the Kaibullaev and his newspaper received a formal warning in June over supposed  ‘propaganda of extremism’.  ‘Prosecutor’ Natalya Poklonskaya  considered that texts in the newspaper arouse tension in inter-ethnic relations and constitute extremist activity.  The words deemed ‘extremist’ appeared to include ’annexation’, ‘occupation’ and ‘temporary occupation of the Crimea’.