Mustafa Dzhemiliev: No contact with son held in Russian detention 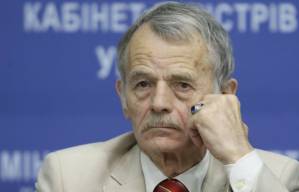 Banned by the Russian occupiers of his homeland, Mustafa Dzhemiliev, veteran Crimean Tatar leader and Ukrainian MP, will not be able to attend his father-in-law’s funeral in Bakhchysarai.  He hopes that the funeral of 91-year-old Mustafa Izmailov will pass without any provocation from the authorities but believes it hard to make any predictions.   He himself has no contact with the occupation regime and sees no point in trying to hold any talks with them.

Mustafa Dzhemiliev told DePo that he has not seen his wife since June when they travelled together to Poland where the renowned Crimean Tatar leader accepted Poland’s first Solidarity Award and met with world leaders, including US President Barack Obama.

Dzhemiliev has no contact with his son, Khaiser who is now being held illegally in a Russian SIZO [detention centre].

Within 2 months of invading and annexing the Crimea, the Russian authorities and Crimean puppet government banned the 71-year-old Mustafa Dzhemiliev for five years.  They have since imposed the same ban on Refat Chubarov, current head of the Mejlis of the Crimean Tatar People.

Dzhemiliev is blunt in accusing the Russian occupiers of open blackmail in holding his son in detention.   Khaiser Dzhemiliev was moved in September from a detention centre in the Crimea to Russia’s Krasnodar region. This is in flagrant breach of a directive from the European Court of Human Rights which on July 10 applied Rule 39 ordering that Khaiser be released from custody.

In May 2013 Khaiser Dzhemiliev shot and killed Fevzi Edemov who was working as a guard to the family.  All the evidence indicates that this was a tragic accident, and that the correct charge should be of manslaughter through careless use of firearms.  Attempts to use the case to put pressure on Mustafa Dzhemiliev were first made under the presidency of Viktor Yanukovych.  In 2014, after the latter fled Ukraine, the Kyiv Prosecutor has allowed an application to requalify the crime as manslaughter through carelessness and two Kyiv courts have ruled that Khaiser should be released from custody.

It was because these rulings were ignored that Dzhemiliev approached the European Court of Human Rights, which on July 10 applied Rule 39 ordering that Khaiser be released from custody. European Court of Human Rights judgements, as well as instructions under Rule 39, are binding on all signatories to the European Convention, including Russia.  Instead of complying with the instruction, however, Russia moved the young Ukrainian national to Russia.

In August Mustafa Dzhemiliev recounted how he had been approached by Putin’s people who proposed a meeting which, they hinted, could determine whether or not Khaiser Dzhemiliev was released from custody.

Khaiser Dzhemiliev is a Ukrainian national and has not been convicted of any crime.  Even if there were justification in keeping him in detention in Crimea, there can be none in taking him into Russia and holding him, effectively, incommunicado.