Nadiya Savchenko: I’m sick of Russia and your lying courts 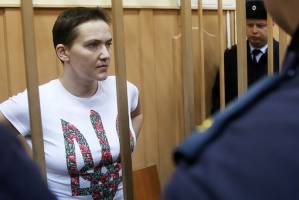 Ukrainian pilot and now MP, Nadiya Savchenko was finally taken to the Basmanny Court in Moscow on Friday and expressed her full contempt of both the Russian media and ‘courts’.  In fact, however, Friday’s court hearing did bring one surprise – an impeccably law-based decision.

The Russian ‘investigators’ had refused to add testimony from three witnesses to the case.  Their motivation is unfortunately clear since the said testimony from two Ukrainian soldiers and Nadiya Savchenko’s sister, Vera indicate that she could not have committed the crime Russia’s Investigative Committee decided to charge her with.  On June 17 when two Russian journalists died from mortar fire, Savchenko was in a completely different place from where she was soon taken prisoner by Kremlin-backed militants from the self-proclaimed Luhansk people’s republic.  One of her lawyers, Ilya Novikov adds that there are also records from her mobile phone and those of others to back this.

Given the steady flow of unlawful decisions and actions with respect to Nadiya Savchenko, Nikolai Polozov who is also representing Savchenko, told a Radio Svoboda correspondent that the about-turn allowing the witness statements to be included had been “a pleasant surprise” for him and his colleagues.

The investigators had claimed that the lawyers did not have the right to collect evidence outside Russia. In a case where the charges appear to be based on allegations made by the Kremlin-backed militants in Ukraine’s Luhansk oblast who first captured the Ukrainian officer, then took her by force to Russia, the argument seems especially cynical.  It is also based on an inaccurate interpretation of the law as the Advocates’ Chamber of Moscow confirmed.  Polozov believes that it was because the law was so clearly in Savchenko’s favour that the Investigative Committee gave up fighting and an investigator literally on the eve of the court hearing signed a decision to include the material.  This is an important precedent enabling the defence to add other evidence.

Polozov points out, however, that the case is specific in that the ultimate outcome will not be achieved through a court of law, but through diplomatic and political means.  The decision will be taken by the Kremlin.  The lawyer adds, though, that the more that they can demonstrate in court that Savchenko is being held in Russia illegally, that the Investigative Committee is behaving unlawfully, etc., the greater the pressure to achieve an acceptable political solution.  He is confident that a political solution will evidentially be found, and Savchenko freed.

The defence, he says, is exploring a range of possibilities in this case.  They are, for example, dealing with various international organizations. If the International Red Cross, he points out, were to formerly recognize Nadiya Savchenko as a prisoner of war, Russia would be bound under the Geneva Convention to stop the prosecution.  He suggests that since Savchenko is now an MP, she could be delegated to the Parliamentary Assembly of the Council of Europe [PACE] which would give her diplomatic immunity.

As reported, Nadiya Savchenko has been able to recognize around 3 of the people who abducted her.  One – Igor Plotnytsky, now the leader of the so-called LPR, she recognized having seen him on television.

Her defence have lodged a formal complaint regarding her abduction in which they believe some 43 people were involved.

The fate of this complaint is, unfortunately, easy to foresee.  Russia has consistently claimed that Nadiya Savchenko entered Russian voluntarily., and around a week ago the investigators suggested that the pilot might be charged with ‘illegally crossing the border’.

Since Nadiya Savchenko had been captured by militants in Ukraine and she herself categorically denies that she ‘voluntarily’ ceased to be held by the Kremlin-backed militants, only to choose to cross into Russia, such charges are totally incredible.

Nadiya Savchenko was taken prisoner in the Luhansk oblast by LPR militants on June 17 or 18.  Two days later a video appeared of her being interrogated by the militants. She demonstrated courage during the interrogation and refused to provide the information the militants demanded.

They also assert that Savchenko crossed the Russian border, without any documents, pretending to be a refugee.  They allege that she was initially detained to establish her identity.  How they plan to charge her with illegally entering the country is not quite clear.

Savchenko is now back in SIZO or the pre-trial detention centre after being held at the notorious Serbsky Institute for a month. Her appeal against the forced ‘psychiatric assessment’ was simply deferred by the court, however she herself simply refused to cooperate with the Serbsky staff.

Nadiya Savchenko is now an MP, having been candidate No. 1 in the Batkivshchyna Party.  Yulia Tymoshenko was second on the list.