Persecution of elderly activist exposing Russian soldiers’ deaths in Ukraine continuesRussian rights activist investigating soldiers’ deaths in Ukraine arrestedRussia continues lying about solders’ deaths in UkraineFirst reports on Pro-Kremlin TV of Russian soldiers killed in UkraineEntire Pskov paratrooper regiment killed in Ukraine?More Russian conscripts forced to fight in UkraineAttacked for asking why Russian paratroopers died fighting in UkraineThe Russian Invasion and Deaths Putin didn’t mentionRussian NGO has list of 400 killed or wounded Russian soldiersIf Russia is not at war, then who is in those freshly-dug graves?Macabre Convoy: Cargo 200 from Ukraine to RussiaInvasion by any other nameHalf-empty or half-emptied?Poland knows about Russian ‘humanitarian convoys’. It didn’t let one in.Stand up to Putin: buy Polish apples!No Sanctions Game Changer?Will the West sleep through this final wake-up call?Russian LifeNews inadvertently told the truth about downed Malaysian airlineMilitants accused of deliberately shooting at Severodonetsk residential areaSent to be shot
• Topics / News from the CIS countries 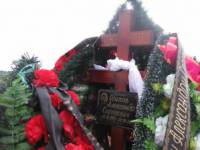 The latest Levada Centre survey carried out from Oct 24-27 has found that only 13% would support their sons fighting for the Kremlin-backed militants in eastern Ukraine, while two thirds (68%) would try to stop them going.  The question, rather misleadingly, suggested that parents would have a choice.  In fact, one other result shows that the number of Russians believing that the paratroopers killed were volunteers is falling.

52% had not heard about the death of the Pskov paratroopers in Ukraine, while 43% said that they were aware of their deaths.  If in September 37% considered that the paratroopers had been volunteers who went to fight with the militants at their own initiative, that figure in October had fallen to 29%.   Only 2% more, however, said that the Pskov paratroopers had been sent by the unit’s command, with the ‘hard to say’ camp higher – from 28% to 33%.   Almost a quarter of those surveyed (23% in September, 24% in October) called the reports an Internet fake.  As reported here, Russian television has almost totally muffled reports of deaths, and where they have been acknowledged, push the theme that these were ‘patriots’ who took leave to go and fight in Ukraine.

41% approved of the work of civic organizations in making lists of Russian soldiers killed or wounded over recent months, while 23% didn’t know.  Only 12% did not believe that Russian soldiers are dying in Ukraine.

The respondents were asked the following question: What do you think about the detention on charges of fraud of a human rights activist and head of a local Soldiers Mothers civic organization who had drawn up a list of Russian soldiers and officers killed or wounded recently?

They were not told that Ludmila Bogatenkova is 71-years-old, nor about the highly dubious circumstances of her arrest and detention.

The first information about the deaths of servicemen were on Aug 25 when Lev Schlosberg, a Pskov politician and journalist published an article  “The Dead and the Living”  in which he described the funerals on Aug 25 of two paratroopers -  Leonid Kichatkin and Alexander Osipov - in the village of Vybuty outside Pskov.   The article began with the words: “The Russian state is trying to hide the fact that it is sending its sons to war, conceal how they die and where their funerals are taking place”.

On Aug 29 Lev Schlosberg was subjected to a savage attack and ended up in hospital with head and skull injuries.

There were also grotesque attempts to conceal the circumstances of the paratroopers’ death, with an attempt made even to pretend that one of the men – Leonid Kichatkin – was still alive.

It later transpired that the majority of paratroopers in the unit were probably killed in Ukraine.

While the Kremlin continues to deny any military involvement in Ukraine, more and more information has been coming to light of soldiers, many of them conscripts, sent to fight in Ukraine.  There have been numerous reports of conscripts being told that if they don’t sign a contract, allowing them to be sent to Ukraine, the commander will sign it for them.

It was specifically cases involving young conscripts that Ludmila Bogatenkova was gathering information about.  She was placed under house arrest after the extraordinary weekend where the investigators had the 71-year-old woman who suffers from a number of serious medical conditions to a detention centre in a city 120 kilometres away.  The staff of the SIZO or detention centre refused to admit her, clearly fearing that she would not survive a day in their unit.