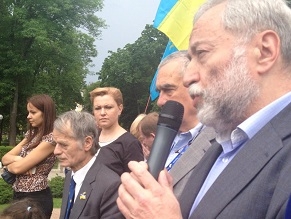 Josef Zisels speaking on the seventieth anniversary of the Deportation of the Crimean Tatar People in Kyiv, May 2014

Ukraine’s leading Jewish organizations are holding a joint conference this week and hope to create one single coordinating body, representing all organizations. If they succeed, this will be the latest demonstration by Ukrainians from all faiths and ethnic groups of unity in the face of Russian aggression.

Claims that first EuroMaidan, and then the new Kyiv authorities, are ‘fascist and anti-Semitic’ have consistently run up against problems, most particularly categorical denial by many Jewish public figures and organizations.  Earlier in 2014, a number of prominent Jewish religious and secular figures even published full-page statements in major international newspapers to refute the narrative from Moscow.

In early October claims in the Russian media that the national organization Right Sector had “declared war on Odessa Jews” were publicly refuted by the Odessa Jewish Community.

Jerusalem Post reports that Yevgeny Piskunov, an official at the Russian embassy in Tel Aviv has claimed in response that Kyiv is “intentionally playing down instances of violence against Jews and other minorities”.  The newspaper notes that Piskunov’s claims were angrily rejected by both Edward Dolinsky of the Ukrainian Jewish Committee and Josef Zisels, president of Vaad, the Association of Jewish Organizations and Communities of Ukraine.  However it also quotes Efraim Zuroff from the Simon Wiesenthal Centre who suggests that while “the Russians have a vested interest in highlighting such incidents, to the extent that they really occur, the Ukrainians have a vested interest in playing them down, for obvious reasons”.

It is seriously difficult to imagine how Jewish groups would have a vested interest in playing down anti-Semitism.  Zisel’s organization, for example, has been monitoring anti-Semitism and xenophobia in Ukraine for 25 years and not in order to whitewash one or other government.  The monitoring carried out by Viacheslav Likhachev shows a clear decline in anti-Semitic acts with the peak between 2005 and 2007.  Likhachev believes that a number of apparent anti-Semitic acts in 2014 may turn out to have been deliberate provocation.  It is interesting that the Odessa Jewish Community, in its statement refuting the hysteria on Russian television, indicated similar suspicions regarding the claims made by a person who, if he existed at all, had never been seen by the Odessa community.

It is obviously true that there are both supporters and opponents of EuroMaidan and the present government in Jewish organizations.  This might make for heated discussion, but would not justify dangerous lies whether exaggerating or denying anti-Semitism in Ukraine.

A united voice among Jewish organizations at least with respect to combating anti-Semitism would be an important countering force to ongoing efforts, against all the evidence from monitoring;  election results and prominent Jewish figures, to claim that the ‘real’ figures on anti-Semitism are being concealed.

In an interview, Josef Zisels explained that various Ukrainian governments have over many years complained that there are too many organizations and it’s hard to know who to listen to when there is no single position.

“This issue becomes particularly acute  in critical times for the country and community – when there are arguments about whether anti-Semitism is on the rise in Ukraine, or not, and whether radicals are the mainstay of EuroMaidan or not. We’ve been asked to somehow come to agreement among ourselves as to who will represent the Jewish community at different levels.”

There have, he acknowledges, been attempts before, and cities among others, the lack of success in agreeing on a memorial at Babyn Yar [Babi Yar] where at the end of September 1941 the Nazis murdered over 33 thousand Ukrainian Jews.

Zisels has proposed that each organization hold their own congress at the same time and discuss the issues that they deem most important.  He hopes that each will adopt a decision on the creation of a coordinating body.

Ukraine has been fighting Russia’s undeclared war for 8 months now.  Zisels notes that a lot more Jewish people are leaving for Israel with 2.5 times as many so far this year as at the same time last year. Of 20, 000 Jewish people living in the area of conflict, around 5 thousand have left their homes, mainly people from large cities. Around 10% went to Russia; 30% to Israel and the others have been taken in by Jewish communities around Ukraine.

On the other hand, he stresses, there is no specific Jewish context to this undeclared war.  Even in the propaganda field the rhetoric has eased, he adds.

With Russia’s undoubtedly superior military power, Moscow and its proxies in eastern Ukraine have unleashed untold suffering and destruction in recent months.  They have also united Ukrainians from different backgrounds, faiths and ethnic groups.  Let’s hope this week’s conference follows that positive trend.