Seized by Russian soldiers near Ilovaisk, beaten by Kremlin-backed militants 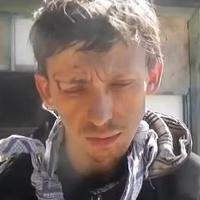 A YouTube clip has been posted showing how Kremlin-backed militants interrogated and beat up journalist Yehor Vorobyov after he was captured  by Russian soldiers near Ilovaisk.  Vorobyov has clearly already been beaten up, and is struck hard after he answers – truthfully – that they were captured by Russians in uniform.

As reported, Yehor Vorobyov, journalist for Espreso TV, was released on Oct 7 after being held prisoner for 38 days.  He was captured together with cameraman Tarak Chkan, and Road Control journalist Rostislav Shaposhnikov,   The Ukrainian soldiers whose defence of Ilovaisk the journalists were covering had come under a major attack by Russian soldiers whose involvement in Ukraine Russia is continuing to deny.

In its report on the video clip Road Control confirms that Vorobyov’s account of events under interrogation is correct.  On Aug 29 the three were trying to leave Ilovaisk by a supposed ‘green corridor’ but came under fire and their vehicle drove into a forest plantation.  They spent the night there, then tried to escape but were captured.

It is not clear why only Vorobyov was held, and then handed over to the militants of the self-proclaimed ‘Donetsk people’s republic’ [DPR].  On Aug 31, Chkan and Shaposhnikov were released, and shortly afterwards Shaposhnikov gave an interview with the same account of events. He is therefore able to confirm that Vorobyov’s statement that they had been captured by Russian soldiers was completely correct.  On the video it leads to Vorobyov being beaten harder.

Shaposhnikov reports that the Russian military simply handed them over and did not mistreat them in any way.

The effective massacre of Ukrainian soldiers outside Ilovaisk was one of the most tragic and bloody disasters of the war in eastern Ukraine.  According to an official report, there was a fatal three-day delay in getting reinforcements to the men defending Ilovaisk which led to a number of Ukrainian units being totally surrounded.

It was the major deployment of Russian forces in that area and the Ilovaisk tragedy that resulted in a peace deal which was extremely unfavourable for Ukraine.

On Aug 28, Vorobyov had managed to interview two Russian paratroopers caught by the Ukrainian army. The soldiers explained that they had been told they were going on exercises.  They had been taken in column at night first to somewhere near the Ukraine – Russian border and then into Ukraine.  Asked by TV Espreso’s Yehor Vorobyov when they realized that they weren’t on a training exercise,   Ruslan Akhmetov and Arseny Ilmigov answered: “When we came under fire”.

In the early hours of Aug 29 a particularly hypocritical ‘Appeal to the insurgents of Novorossiya’ appeared on Russian President Vladimir Putin’s official website.  This called on “the insurgents” to create a humanitarian corridor for Ukrainian soldiers surrounded, and allow them to “be reunited with their families, return them to their mothers, wives and children”.

A ‘promise’ was duly issued, only to be broken immediately and a large number of Ukrainian soldiers coming under fire, with hundreds killed or badly wounded.