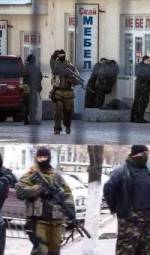 Russian President Vladimir Putin is expected at the G20 Summit in Brisbane, Australia on Nov 15. Please encourage journalists to ask Putin questions that pack a punch, but that only foreigners can ask without risking being hit literally!

About the Kremlin-backed militants and their ‘elections’ in Donbas

why Russia is now saying that it ‘respects’, but does not ‘recognize’ the elections;

why in that case it organized and paid for observers who found everything exemplary;

why both for its Crimean ‘referendum’ and for the Donbas ‘elections’ its ‘observer missions’ were made up of  members of far-right, neo-Nazi or Stalinist political parties.

About the Crimean Tatars who have been killed or disappeared, banished from their homeland or branded as ‘extremists’ since Russia’s annexation of the Crimea

Russian Offensive against the Crimean Tatars

About Nadiya Savchenko, the Ukrainian officer captured by militants in eastern Ukraine, and abducted to Russia where she is now facing serious charges

Captured by Militants in Ukraine, Tried in Russia

About why if Russia claims to be opposing ‘fascists’ and ‘anti-Semites’ in Ukraine, so many of the militants it supports in eastern Ukraine have links to far-right or neo-Nazi parties and the Jewish community keeps publicly refuting Russian assertions

Please help circulate and get these questions heard.