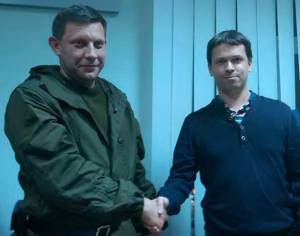 Alexander Zakharchenko, one of the leading militants with ’observer’ Fabrice Beaur from the far-right Parti communautaire national-européen

On why Russia organized and paid for the ‘observers’ of the ‘elections’ in Donbas it is now only ‘respecting’, not ‘recognizing’ and why for both its Crimean ‘referendum’ and for the Donbas ‘elections’ its ‘observer missions’ were made up of far-right, neo-Nazi or Stalinist politicians

The UN, EU and USA’s attitude to the ‘elections’ in the areas controlled by Kremlin-backed militants [the self-proclaimed Donetsk and Luhansk people’s republics, DPR and LPR respectively] varied only in levels of ‘concern’, ‘disappointment’ and ‘condemnation’.

The Russian approach was considerably more acrobatic.  On Oct 28 Russia’s Foreign Minister Sergei Lavrov stated that they “expect the elections to take place as agreed and we will of course recognize their results”.

On Nov 7, Yury Ushakov, Russian presidential aide asserted that Russia’s position on the elections to DPR and LPR was expressed in the Foreign Ministry’s statement on the results of the elections. “we respect them”, does not mean “we recognize them”.   Lavrov’s ministry stated that the elections had “passed on the whole in an organized manner, with a high turnout. We respect the electoral will of the residents of the South-East. The elected representatives received a mandate for resolving practical tasks on restoring normal life in the regions”.

Why the change of heart, Mr Lavrov?   Was it the vegetables or an apparent concession on the eve of the Brisbane G20 summit? 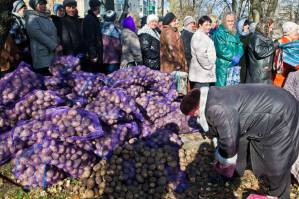 Well-organized the ‘elections’ were, with one of Russia’s so-called ‘humanitarian convoys’ clearly loaded with bags of potatoes, carrots, onions, beetroot and cabbage.  All of these could be ‘bought’ dirt cheap after ‘voting’.  With Donbas infrastructure destroyed because of the fighting and people’s lives devastated, the vegetables were a huge incentive especially for older voters who formed the vast majority of people at ‘polling stations’.

This was recorded by Ukrainian civic activists as well as by the numerous western journalists covering the event.

Neither the vegetables nor the men in camouflage gear with rifles ‘accompanying’ the ballot boxes attracted the attention of the ‘observers’.  The latter chose not to notice the ease with which one could vote several times by presenting a copy of ones passport, not the original.  Since each ‘voter’ could buy only 3 kilograms of vegetables, the material benefits from multiple voting are clear.

What were your observers there for, Mr Putin?

Exactly why were they paid for – and generously - by Moscow?

Much was made in the Russian media of the ‘international observers’ present.  There was even an attempt to present them as being from something called ASCE [the Agency for Security and Cooperation in Europe].  Such an organization did not exist before Nov 1, unlike the OSCE whose observers are taken seriously but who had condemned the farce in Donbas.  It is worth noting that the Russian media also resorted to manipulation over OSCE observers back in March 2014.  Rossiya 24 presented Luc Michel, a far-right Belgian politician and former member of the neo-Nazi Fédération d’action nationale et européenne (FANE) as “organizer of the OSCE observer mission in the Crimea”.  There was no such mission as the OSCE had stated clearly that the so-called referendum was against Ukraine’s Constitution and illegal. 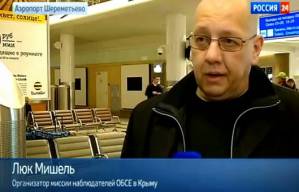 The Crimean ‘observer mission’, like that in November, was made up mainly of representatives of far-right / neo-Nazi parties such as the Hungarian Jobbik or  Belgian Vlaams Belang, or Stalinist parties, such as Greece’s Communist Party.

The ‘referendum’ was praised as “an example to us all”.

One of the ‘observers’ proved remarkably frank about his freebie to Donbas.  Ladislav Zemanek, deputy head of the Czech far-right Eurosceptic ‘People’s Party’ stated on facebook and then confirmed to Radio Svoboda that his trip had been organized and paid for by Moscow.  He was first put up in a four-star hotel in Moscow before being taken illegally into Ukraine.  He explains that he was sent an official invitation from the DPR ‘Central election commission’ but only after “one go-between suggested going to the elections as an observer”.

Zemanek says that he found nothing that aroused his suspicions, except the lack of voter lists.  That “seemed strange to us”.  They were told, however, that voter lists could not be drawn up because there was no list of residents with ‘around a million’ having fled Donbas and many having been killed.  “Their answer satisfied me personally and therefore my suspicions vanished”

Radio Svoboda notes that Zemanek asked to have the interview in Czech since his Russian was not fluent.  Without fluency in the local languages it is difficult to imagine how a person would be able to detect voting shenanigans, but then, there is little to suggest that this was part of the role assigned Zemanek and the others on his ‘mission’.

One of the observers at both the Crimean ‘referendum’ and on Nov 2 was Mateusz Piskorski.  This right-wing Polish politician dabbled with neo-Nazi parties in his younger years,   and according to Shekhovtsov has been actively supporting all Kremlin moves since around 2005. He had only positive things to say about both events.

Why, given Moscow’s claims about a so-called ‘Kyiv fascist junta’, are the observers it puts up in 4 and 5-star hotels all members of far-right, communist or Stalinist parties?

Why can all of these far-right parties, often also adamantly against the EU, be reliably expected to praise all Kremlin-backed elections?

Even the ones that two weeks before the G20 summit Moscow suddenly decides to ‘respect’ but not ‘recognize’?