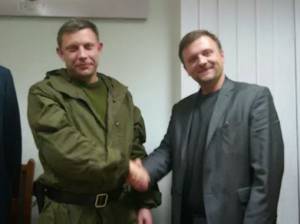 Why, if Russia claims to be opposing ‘fascists’ in Ukraine, do so many of the militants it supports in eastern Ukraine have links to far-right or neo-Nazi parties?  Why is it specifically far-right or Stalinist parties in Europe that support Russia’s annexation of the Crimea and a purported ‘fight against fascism in eastern Ukraine?  Why is it representatives of such parties that have now twice ‘observed’ Kremlin-promoted voting, first in the Crimea, then in Donbas?

Since many of the parties so vocal in support for Russia and critical of Ukraine are vehemently against the EU, often anti-West altogether, their connection with Moscow are well-worth scrutiny.  Here just a few details about Russia’s ongoing battle against the truth which will keep getting in the way of its propaganda.

Jews who “are helping cause a second Holocaust”

Prominent Jewish figures and organizations in Ukraine have seriously damaged Kremlin credibility this year.  Prominent anti-Semitism researcher Viacheslav Likhachev has repeatedly stated that his monitoring shows a steadily decline in anti-Semitic offences since these peaked in 2005/6.  In early March a number of Ukrainian Jews signed an open letter to Russian President Vladimir Putin in which they refuted his claims about anti-Semitism and about ‘protecting’ Russian speakers in Ukraine.  At a press conference in New York on March 4,  reported by the Voice of America Russian Service, the Chief Rabbi of Ukraine, Yaacov Dov Bleich stated that despite the persistent claims in the Russian media, anti-Semitic incidents in Ukraine are extremely infrequent.

Assertions in Israel’s Knesset that Ukraine’s Jews are not complaining about anti-Semitism because they’re terrified for their own lives was immediately rubbished in  an open letter to members of the Knesset.

This prompted Kremlin-faithful writer Alexander Prokhanov to suggest that such Jews were bringing on “a second Holocaust”.  The presenter Evelina Zakamskaya added “They brought on the first the same way”.

There have been numerous fakes or pieces of manipulative reporting in the Russian media trying to doctor the evidence on anti-Semitism.  In early October claims in the Russian media that the nationalist organization Right Sector had “declared war on Odessa Jews” were publicly refuted by the Odessa Jewish Community.  This led to more claims from Russian officials that Kyiv was “intentionally playing down instances of violence against Jews and other minorities”.

Not “Kyiv” – Jewish organizations, and that’s much harder to understand if it’s not true.

This nationalist right-wing movement and its leader, Dmytro Yarosh have been demonized in the Russian press ever since the movement gained prominence during EuroMaidan.  Right Sector was found to be only beaten by the ruling United Russia party in numbers of times it was mentioned in the Russian media.

Nothing seemed to knock this, neither Yarosh’s pitiful showing in the presidential elections, nor his party’s in October’s parliamentary elections. In May, Russia’s First Channel even concocted a fake Central Election tableau suggesting that Yarosh had won a first round in the elections which in fact Petro Poroshenko won outright.

A number of Russian, Ukrainian and some European fascists and neo-Nazis met in Yalta at the end of August to discuss “the fight against the ‘fascist junta in Kyiv’.  The situation is quite surreal.  Although it is hard to tell which particular Kremlin-backed militants are currently ‘in power’, over the last months a large percentage of the militant leaders, together with many from Russia, have been people known for their far-right, sometimes neo-Nazi views.  The ideologues, as well as some prominent members of the neo-Nazi Russian National Unity party, Alexander Dugin’s ultra-nationalist Eurasia Party; Edward Limonov’s Other Russia party and Black Hundred are either actively involved in the fighting in eastern Ukraine or effectively encouraging others to take part. 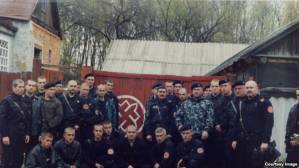 Pavel Gubarev, one of the leaders of the Donetsk militants until very recently is known for his roots in the Russian National Unity party.  His aide,  Alexander Proselkov, shot and killed on July 31 by the militants’ own security guards, was a Russian national and member of  the neo-fascist International Eurasia Movement and Eurasian Youth Union, both closely linked to Dugin.   He was one of many Dugin followers now in eastern Ukraine.

Why Moscow has sought ‘observers’ for the pseudo-referendum in the Crimea and so-called ‘elections’ in Donbas from among fascist and neo-Nazi parties, in EU countries and why the latter have been so willing to oblige are questions that warrant close scrutiny, probably including by EU financial regulatory bodies.