Israeli ambassador sees no particular problem with anti-Semitism in Ukraine 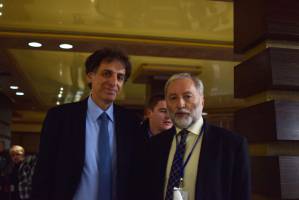 Eli Belotserkovsky, Israel’s Ambassador to Ukraine, has said that there are no particular issues with anti-Semitism and fascism in Ukraine.  UNIAN reports that the  Ambassador was speaking to journalists before the conference of Ukrainian Jewish organizations.

He said that they closely follow what is happening in Ukraine and have not seen any particular problems.  He noted that monitoring is carried out on a regular basis.

The findings of the head of the National Minority Rights Monitoring Group Viacheslav Likhachev, who has been researching anti-Semitism and xenophobia in Ukraine for well over 10 years, are also regularly reported here.  Over the last year, Likhachev has needed to be particularly pro-active in countering first the claims about EuroMaidan made by the former regime under Viktor Yanukovych, then the false claims made by the Russian media and Kremlin.  The latter were seen, for example, in Russian President Vladimir Putin’s claim that Russia was protecting Russian nationals from the “orgy of nationalists, extremists and anti-Semites on the streets of Kyiv”.

This claim was refuted by a number of prominent Jewish public figures who not only signed an open letter to Putin but even went to the trouble of taking out full-page advertisements in the New York Times, Canada’s National Post, Israel’s daily Haaretz and the International New York Times.

“The Russian-speaking citizens of Ukraine are not being humiliated or discriminated against, their civil rights have not been limited, ” the letter says. “Your certainty of the growth of anti-Semitism in Ukraine also does not correspond to the actual facts. It seems you have confused Ukraine with Russia, where Jewish organizations have noticed growth in anti-Semitic tendencies last year.”

Likhachev has found that anti-Semitism in Ukraine peaked in 2005/6 and has since been declining.   In both 2012 and 2013 there were 4 violent hate crimes, with the same number recorded for the first 9 months of 2014.  None was fatal.  There were 9 cases of vandalism, graffiti, etc. in 2012; 7 in 2013 and 16 in the first 9 months of this year.  Likhachev believes, however, that “over half” of the cases reported in the last year may have been deliberate provocation aimed at boosting the propaganda line about EuroMaidan and the new Kyiv government taken first by the Yanukovych regime, then by Moscow.

The conferences passed a joint resolution on the creation of a Council of heads of the main Jewish organizations of Ukraine with this passed by an absolute majority.  They also produced a joint call for the holding of a congress of the Jewish Confederation of Ukraine with Vaad Ukraine and the Society of Jewish Culture of Ukraine co-founding.

The conferences were also attended by ambassadors and diplomats from a number of countries, the Head of the Congress of Nationalities of Ukraine Rovshan Tagiyev; the head of the Mejlis of the Crimean Tatar People Refat Chubarov and the Head of the Union of Poles of Ukraine Antoni Stefanovicz.

Among other resolutions was one “On anti-Semitism in Ukraine” and one which apparently caused “lively debate” and was passed with considerable amendments “pointing out Russia’s armed aggression against Ukraine”.