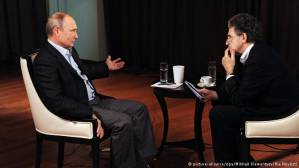 Russian President Vladimir Putin was probably right to leave the G20 Summit early rather than face further humiliation.  Back home both his press service and the media have ensured that most Russians learn nothing of the debacle.  They hear plenty, however, of a German TV interview that provided exactly the gentle uncritical questions Putin has come to expect.

Anybody reading to the very end of Putin’s statement and press conference “on the results of the G20 Summit” will learn that Putin “did not attend the working breakfast” because of his long journey home.  There is no indication that this meant effectively missing the second of a 2-day summit.  In fact, quite the contrary.  For those not reading to the end, a summary of the day is provided, followed by the statement that “following the end of the Summit Vladimir Putin answered journalists’ questions” about a summit which he considers basically ‘successful’.

Government-controlled media have either said nothing or provided deliberately blurred information about the summit.  LifeNews was as always most obliging with an account mentioning Brisbane and the G20 as just one of many stopovers.  To gel with Putin’s own excuse for ‘missing the breakfast together’, his press secretary Dmitry Peskov even spelled out the number of kilometres he’d flown.

The summit was enormously humiliating for Putin and in normal circumstances one might sympathise with attempts to soften the blow.  The list of reasons why this cannot be the case here is long.  It begins with the tanks and Russian military which Russia has been moving into Ukraine over the last weeks.  High on the list must also be the success of overt propaganda and warmongering in the Russian media in shaping Russian public opinion.

According to a new Levada Centre survey, carried out from 24-27 October, 83% of Russians are inclined to believe or are sure that Ukraine is waging an information war against Russia; 88% think the same about the USA and western countries.

Only 12% often read or see information which differs markedly from that on mainstream Russian media; 37% never do, with 43% of those considering them to be anti-Russian propaganda or false, and a further 9% not agreeing with such views and finding them irritating.

59% believe that the Russian media provides an objective image of events in Ukraine, while a further 13% believe that Russia is waging an information war against Ukraine, and that it is justified.  Only 11% acknowledged such disinformation and thought it dangerous and harmful.

While the vast majority of Russians either have no access or see no need to refer to alternative information about events in Ukraine, independent media have positively come under attack.  The latest of many offensives was against the radio station Ekho Moskvy which received a formal warning over supposed ‘extremism’ in a report on the siege of Donetsk airport.

Given the dearth of truthful information in the Russian media, it is frustrating that the only interview provided to a western media source kindly allowed Putin to mislead both German and Russian viewers.

Deutsche Welle explains that the ARD interviewer Hubert Seipel has good contacts in the Kremlin, and has previously produced programmes, such as one about the Russian-Ukrainian gas conflict which placed the blame on Ukraine.  Seipel’s failure to ask critical or hard-hitting questions has been noted in the German press.  He claims that “the viewers are not stupid and can draw their own conclusions”.

They should certainly draw their conclusions about the interviewer since in a number of places Putin openly lied.  Either Seipel did not himself notice, in which case he had not done his homework for the interview, or he is dissembling and allowing his audience to be misled.

During the interview, for example, Putin claims that there was a coup d’état in Ukraine on Feb 21, with the president’s administration and parliament ‘seized’.  This is untrue and not pulled up.  Instead Putin’s complaint that the western signatories to the peace deal signed with the then president Viktor Yanukovych leads only to a question about Russia’s quick reaction in annexing the Crimea and how the west has asserted that this is a violation of international law.

Putin’s attempt to compare the situations in the Crimea and Kosovo has been repeatedly slammed as untenable.  The reasons are clear and the interviewer should at least have mentioned them.  Instead he allows Putin to make claims, such as that Russia ‘intervened’ to prevent a bloodbath without asking for the proof (which has never been provided) and that the events in Crimea were even more justifiable than in Kosovo since “in Crimea the people did not just announce their decision through parliament; they came out to a referendum and its results were simple staggering”.

This claim is also left unquestioned although the scope for criticism of the so-called ‘referendum’ and its ‘observers’ from Europe’s most far-right, neo-Nazi and Stalinist parties was enormous.

Instead Seigel changes subjects and after asserting that “Ukraine is split” asks for Putin’s view of the country’s future.  Perhaps it was reasonable to assume his audience will draw their own conclusions about Putin’s claimed “fears” of ethnic cleansing in Ukraine, or of the country descending into neo-Nazism.  Unfortunately, a large number of totally false assertions are allowed to slip through, such as the claim that the people in Donbas “took to their weapons” after the Kyiv authorities began a wave of arrests in the night.

German media have responded with criticism of the interview and the debate that ensues may prove very useful for Germany. In Russia, however, the interview is yet another occasion for Putin, virtually unimpeded, to present the same distorted arguments and justification for Russia’s aggression against Ukraine.  The German interview was an opportunity to get some hard-hitting questions asked.  The questions might have been edited in the Russian version on the President’s site or in media reports.  They might even have led to the interview being muffled like Putin’s disastrous day at the G20 Summit. Whatever the outcome, it would have been better than the disgrace of the questions not even being asked.